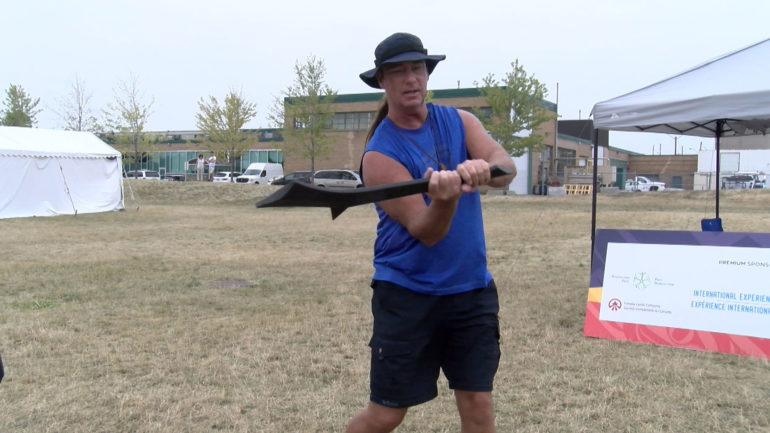 Intermittent rain showers did little to dampen the spirits of everyone present at Downsview Park.

Adults threw tomahawks, children played the drums and performers sang traditional songs, as all aspects of Indigenous culture were on full display this past weekend.

The 2018 Masters Indigenous Games, held in Toronto between June 12 and 15, shone a light on Indigenous sports and culture in the city. They are a sporting exhibition and showcase for all aspects of Indigenous culture, from music and art to food and dress.

Mark Saul, an Anishinaabe Nation chef who cooked food like fried bread, corn and wild rice for guests by the fireside, said the event helps him share his culture and passion with others.

“It’s not just traditional cooking, it’s getting our people back to the land,” Saul said. “We got to get the people to understand where the food comes from.”

Saul also educated guests about Indigenous medicine made out of plants.

“We have the four scared medicines — tobacco, sage, cedar and sweet grass,” he said.

He spends six to eight hours a day to make Indigenous medicine for sampling during events like the games.

George J. Lepine, the chief instructor of Okichitaw Aboriginal martial arts at the Native Canadian Centre of Toronto, taught visitors about the importance of teaching Indigenous history. He also demonstrated how to use weapons like the javelin, tomahawk, plains dagger and the gunstock war club to them.

“I’ve been doing this for a very, very long time,” Lepine said. “My uncles were involved in doing certain types of weapon movements historically, and we only started rejuvenating in probably the last 20, 30 years. As a result of the Indian Act, we were prevented from doing certain cultural practices.”

He said he started learning his practice in the 1970s and is grateful he can still teach it today.

A woman throwing a tomahawk at a target during the Masters Indigenous Games at Downsview Park in Toronto last week. (Scott Savard)

“It’s a point where we can actually share these experiences with people that may not even know that we do these types of activities,” he said. “We’re still participating in a lot of mainstream sports, but unique applications like this are quite a niche. Especially when you get into things like the gunstock war club and those types of Indigenous weapons.

“They’re very unique and they’re very much our own, so opportunities like this provide us a great platform for us to share those experiences with people,” Lepine said.

The gunstock war club evolved after the introduction of the musket. Lepine said when his people saw empty muskets being used as impact weapons, they started fashioning gunstocks to appear as if they were carrying firearms.

Gunstock war clubs were used for military warfare but the javelin, tomahawk and plains dagger were crafted for hunting and harvesting.

“I come from a Buffalo society in the plains, so I’m from Manitoba. We did a lot of nomadic movements — following the Buffalo herd — so those implements would be used all the time,” Lepine said.