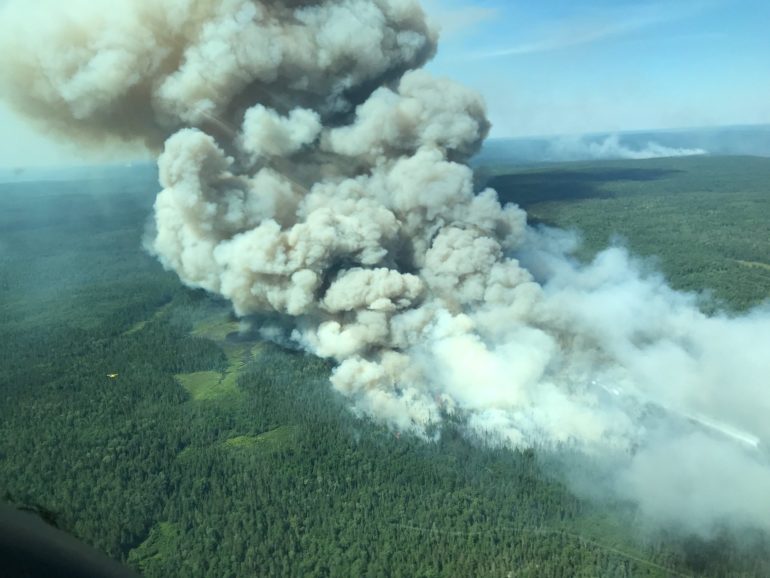 Forest fires are raging across Northern Ontario as firefighters from across Canada fight to keep them contained.

There are now 55 fires smoldering across the northern portion of the province, from west of Ottawa to north of Kenora, to the shores of the Hudson Bay. Of these fires, 21 are reported to be out of control.

There are evacuation orders and alerts in place in various communities including the Key Harbour community in the Perry Sound area where one of the largest fires, Perry Sound 33, is blazing out of control over 5,000 hectares, according to The Weather Network.

This particular fire is currently under investigation by Ontario’s Ministry of Natural Resources and Forestry (MNRF).

There has been speculation about the cause of the fire. Workers from a major wind turbine project by the Pattern Energy Group told the CBC there were little fires that started from their machines but the one in question was too much for workers to control.

Pattern Energy Group released an official statement to the CBC following questions about how the fire started and if the company had any fire suppression protocols in place when starting this project.

Much of the cottage areas throughout Ontario have been under a strict no open fire ban due to dry and humid conditions increasing the risk of forest fires in the area. The MNRF issued a “restricted fire zone” which has expanded to include much of southern Ontario.

Due to extreme fire hazard, recent periods of lightning,
little rain & increased forest fires, MNRF has expanded the Restricted Fire
Zone to include parts of Southern Region of Ontario as outlined on the map
below. In effect as of 12:01 AM on July 24, until further notice. pic.twitter.com/Sp5KaGg38i

With smoke filling the skies through containment efforts, the OPP temporarily closed Highway 17 in the Pembroke district north of Ottawa. They are warning drivers that smoke will be visible from various highways throughout Northern Ontario and to watch for emergency vehicles on the roads, encouraging drivers to drive safe and help to fire rangers remain safe while working.

#Smoke may be seen today along Hwy 11 North due to smoke drift from a number of #fires in the #Northwest Region. Drive safe! #Ontario pic.twitter.com/BvOhGmHaR7

In addition to Ontario firefighters’ efforts, help has been enlisted from other provinces as well as Mexico and the United States who have sent firefighter crews and equipment to assist.

Assistance from across Canada and as far away as Mexico have joined #ForestFire fighting efforts in the #Northeast Region. Mexican fire crews arrived at Sudbury July 20, and are deployed to fires around the region. #Ontario pic.twitter.com/fyrfhnKRIW

Fire rangers are looking for assistance from Mother Nature, hoping for rain as the fires continue. The Weather Network states there is a small chance of rain in some key areas this week, however they are concerned about lightning in the forecast, which has been primarily responsible for the spike in forest fires this year.

The fires blazing through Northern Ontario started just before the tragic wildfires raging in Greece, leaving at least 74 people dead. The fires in Greece are being reported as the worst since the 2007 fires ravaged the southern Peloponnese peninsula east of Athens.