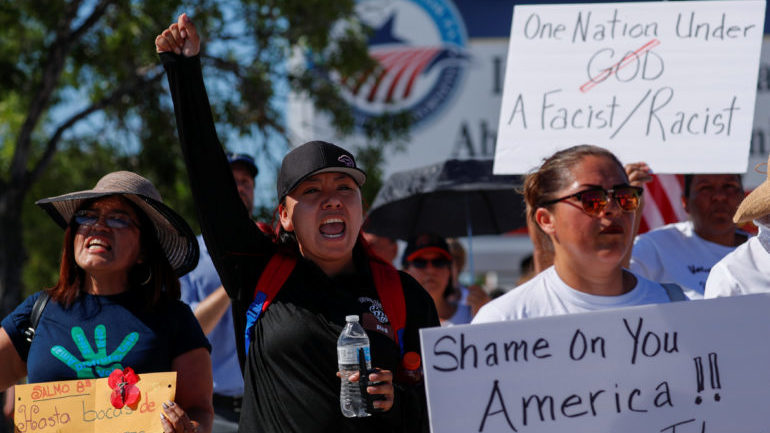 If a picture is worth a thousand words, then ProPublica’s obtained audio of children wailing for their moms and dads in a detention centre can speak volumes.

President Donald Trump’s “Zero Tolerance” immigration policy is breaking apart families, children are being detained for an indefinite period of time, while their parents or the caregivers they came to the U.S. with are being prosecuted.

Two thousand children — with 100 being under the age of four — have been separated from their parents or caregivers and are being detained in cages in a warehouse while they wait for what the U.S. government has in store for them next.

“My mommy says that I’ll go with my aunt,” she whimpers, “and that she’ll come to pick me up there as quickly as possible.” https://t.co/Ec7VnLoJZp

In the span of about 24 hours, all four living former first ladies have criticized the Trump administration’s zero tolerance policy. Even the current first lady, Melania Trump, issued a statement that appeared to align somewhat with her predecessors. https://t.co/RAkMAUngma

“I feel the United States has lost it’s humanity,” said Ronalee Carey, an immigration lawyer based in Ottawa. She represents refugee claimants who have arrived in Canada and is also involved with a group that privately sponsors refugees.

Carey said she does believe Trump’s actions can be classified as inhumane.

She said although she hasn’t been to a refugee camp herself, she’s heard stories and seen photos.

Carey, a former foster parent with the Children’s Aid Society in Ottawa, has adopted three foster children. She drew correlations between her experience with dealing with her own foster children’s separation anxiety and what the children in the detention centers must be going through.

“In that process I learned quite a bit about detachment disorder…a condition that arises when children have inconsistent attachment to a primary caregiver,” Carey said. She said in that case, either the caregiver is neglectful or the children are removed from their primary caregiver, usually under traumatic circumstances.

“They develop detachment disorder and it can affect their ability to relate to other individuals in their lives for the rest of their life,” Carey said.

She said her experience with refugees is primarily with individuals from Syria, who fled the war there. Carey said the situation in Syria relating to the civil war is different in comparison to the gang violence in Central America.

“The international community has stepped up when it comes to Syrians, the United Nations has set up refugee camps and things like that,” she said.

Many of the migrants attempting to gain entry into the U.S are from Central America.

“In Central America it’s a lot different, they don’t have any international resources and they’re fleeing by whatever means they can,” Carey said. “They’re paying smugglers, traveling under the cover of darkness, getting their way through Mexico and to the United States to make these refugee claims.”

Yesterday on Parliament Hill, Prime Minister Justin Trudeau said he would not “play politics” when asked about Trump’s “Zero Tolerance” policy. He reiterated his stance again when NDP MP Jenny Kwan passionately called on him to suspend the Safe Third Country Agreement between Canada and the U.S.

Trudeau did not say that he would suspend the agreement and he did not condemn Trump’s controversial immigration practices either.

Carey thinks Trudeau has an obligation as a human being, much less as Prime Minister, to use his influence to prevent these children from getting separated.

Tim Powers, an expert on government affairs and vice-chairman at polling firm Summa Strategies, is a parent who said what is happening in the U.S. is traumatic and stressful for both the children and their parents.

Powers said he could only imagine what those children are going through as they are separated from their parents.

He said that he would not want to go through a similar situation with his own family.

Powers said he thinks Trudeau is trying to be careful about what he says.

He said the PM may believe it’s not his place to tell Trump what to do because then the preisdent would point fingers and try to shift blame.

Powers said Trudeau is essentially trying to avoid getting into a dispute with Trump.

The American president went after the PM following the G7 meeting in Quebec earlier this month.

Powers said suspending the Safe Third Country Agreement would not be logistical as Canada and Mexico are divided by the U.S. and wondered how migrants would safely make it north to the Canadian provinces.