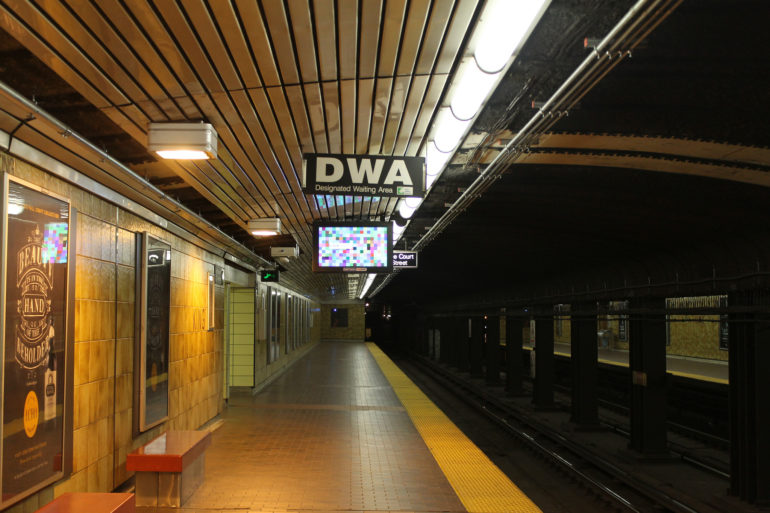 Toronto subway stations lack any barriers between the platform and tracks. (Flickr/Stacie DaPonte).

Security at a major subway station in one of the world’s “safest transit systems”  has become a concern to commuters after a man was pushed in front of an oncoming TTC subway.

The victim, Yosuke Hayahara, 73, died shortly after another man allegedly pushed him into the path of an oncoming train at the Yonge-Bloor station about 10:15 a.m. Monday, Toronto police said. A suspect was arrested at the scene.

Toronto homicide squad Detective Rob North said the victim and the accused approached the tracks as the train came into the station. The victim was then pushed in front of the train.

There was no altercation or interaction between the victim and accused prior to the push and the two didn’t know each other, he said.

The city’s 43rd murder of the year has raised concerns among commuters. The Yonge and Bloor stations handled about 409,200 passengers a day, according to 2015 TTC statistics.

“It’s the subway and you should always keep a distance but you should also not have to expect someone’s going to push you,” he said.

The man who allegedly pushed Hayahara onto the tracks will be the second person charged with first-degree murder involving an incident at a TTC station since 1997, when Charlene Minkowski, 23, was pushed into the path of oncoming train at Dundas station. A man was convicted with her murder.

TTC Spokesperson Stuart Green said the system remains “one of the safest” of large transit systems in the world, but they will review incidents like this to prevent them from ever happening again.

“We are also moving to a new model for stations,” Green said. “Customer service agents will be out in the station helping with safety and keeping people safe. It’ll be helpful having those extra eyes on the platform and around the station.”

He said TTC has “additional staff at our busy stations during peak periods, like rush hours, who help manage crowds trying to keep them safe.”

The city and TTC are currently studying the implementation of platform edge doors, or barriers, in subway stations, at a cost of about $20 million per station.

Green said there are a lot of complexities with this installment.

The estimated amount for this investment will be around a billion and a half dollars, Green said.

Humber student Gouveia is skeptical about the new plan.

“They always say they’re going to add something to the TTC and they’re always talking about money issues,” he said. “There are even some subway stations that have a massive gap and all they do is put a little stick on the floor saying ‘mind the gap here.'”

John Reszetnik, 57, of Toronto, is charged with first-degree murder.