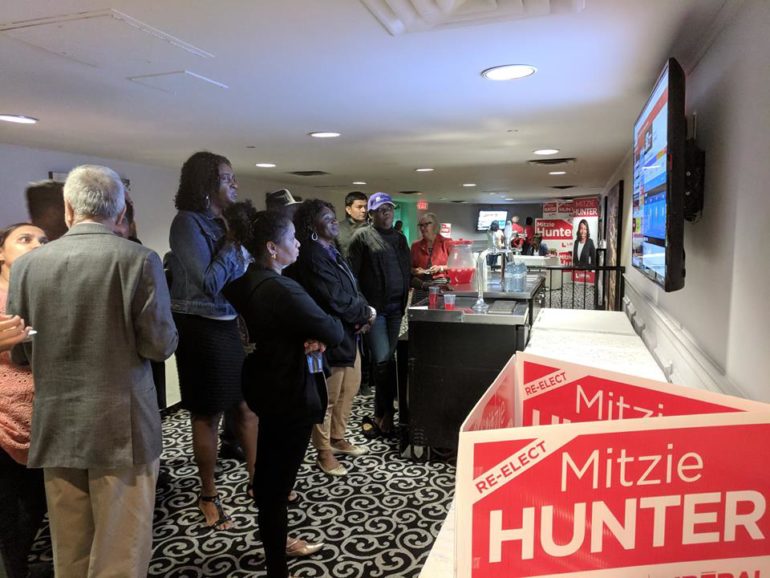 Liberal Mitzie Hunter was the victor after a nail biter of a vote count in her riding of Scarborough-Guildwood in the Ontario Election.

Coming in a close second was Progressive Conservative candidate Roshan Nallaratnam. He took 11,884 votes or 33.12 per cent.

Emotions were high, as anxious supporters waited for the final result.

Emcee for the evening at Liberal Headquarters, Katie Tsuyuki, was confident in Hunter’s re-election.

“Mitzie is the best candidate for this position because she has passion and drive. She has delivered once before and she can do it again,” she said.

In the midst of decision time, Hunter made an appearance at the Liberal Headquarters to address and thank her supporters.

“What I do know, we have done every single thing we need to do in this riding and in this community. Because we believe in the work we are doing,” she said.

Located in Toronto’s east end, Scarborough-Guildwood has a population of 102,390. The riding is bordered by Markham Road, Eglinton Avenue East, Bellamy Road and McCowan Road to the west, Highway 401 to the north, Morningside Avenue to the east and Lake Ontario to the south.

The incumbent, Hunter, was seeking re-election and wanted to continue working towards a better education and healthcare system.

“Our government is committed to ensuring everyone in Ontario has access to high-quality primary care, close to home. Today’s investment will help expand access to inter-professional primary care teams and make sure residents in Scarborough get the care they need when they need it most,” she says on her website after an initiative for better primary healthcare.

The NDP’s Tom Packwood said on his website he was determined “to bring change for the better to Scarborough-Guildwood with Andrea Horwath’s plan to turn student loans into grants, fix health care and make sure everyone has access to dental care and prescription drugs.”

An email allegedly from the PC’s Nallaratnam caused an uproar during the campaign. The email contained harsh language and vulgar remarks towards the Tamil community, although Nallaratnam released a statement saying the account where the email came from did not belong to him. Nallaratnam’s website says that “he has been very vocal on issues concerning security and family welfare,” along with working with youth in the Toronto community through sports and social awareness programs.

Linda Rice of the Greens was presented as an advocate for “pay equity, ending violence and harassment; child care; missing and murdered indigenous women, preservation of our water resources; housing issues; accessible transportation and caregiver benefit.” Rice is currently the President of the North Toronto Business and Professional Women’s Club since 2010.

Also in the running were Benjamin Mbaegbu listed with no party affiliation, George Marcos Garvida of the Trillium Party TPO), Hamid-Reza Dehnad-Tabatabaei of the Libertarian party, Heather Dunbar of The People party, and Wanda Ryan, a candidate for the Party for People with Special Needs.

In the 2014 Ontario general election, seven candidates ran in Scarbourough-Guildwood.