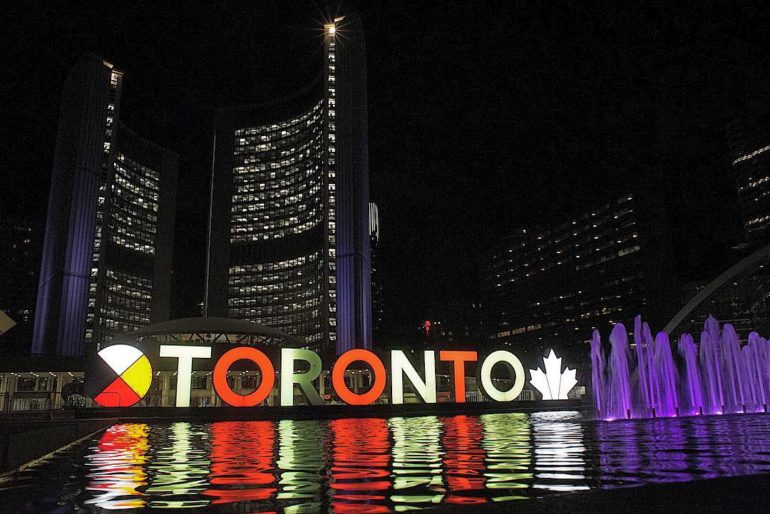 The Toronto sign, located in Nathan Phillips Square, will feature a couple of new additions that honour Indigenous traditions and values.

In honour of National Indigenous Peoples Day on June 21, the City of Toronto is adding a Medicine Wheel and a new vinyl wrap to the Toronto Sign. News release: https://t.co/gZ2zncAEil #xoTO pic.twitter.com/JBqZNeYYen

Vinyl, which includes symbols that reflect culture, traditions and values in Indigenous communities, will wrap each letter of the city’s name, while the ‘T’ will have a Medicine Wheel placed next to it.

Co-Chair of the City’s Aboriginal Affairs Advisory Committee Frances Sanderson, in charge of the non-profit Nishnawbe Homes, offered a greeting to the city.

“Miigwetch to the City of Toronto for honouring your commitment to the First Nations, Métis, and Inuit people of this land by incorporating the healing of the Medicine Wall in the iconic Toronto sign,” she said.

The Medicine Wheel was chosen specifically as an emblem that signifies completeness, as its four directions of north, south, east, and west convey strength and connectedness.

“The Medicine Wheel is a great addition to the Toronto Sign and positive action for National Indigenous Day. For Toronto Council Fire, we look forward to incorporating this into the IRSS Legacy Celebration in October 2018 on Nathan Phillips Square,” said Andrea Chrisjohn, a member of the city’s Aboriginal Affairs Advisory Committee.

“It lends to a foundation in our partnership with the city that embraces a greater understanding and commitment to the Teaching, Learning, and Healing space being developed on the southwestern corner of Nathan Philips Square,” she said.

It was a proud moment having both a historical and contemporary Indigenous presence in the city of Toronto, says Chair of the Economic Development Committee Councillor Michael Thompson.

“City initiatives like these and the Indigenous Arts Festival are helping to build a tradition of Toronto profiling the Indigenous experience, past and present, at some of the city’s most accessible and prominent public locations,” said Mike Layton, Councillor for Ward-19, Trinity-Spadina.

The showcase precedes the June 21 to 24 Indigenous Arts Festival, a free four-day which will feature more than 30 performances by Indigenous artists across Canada.