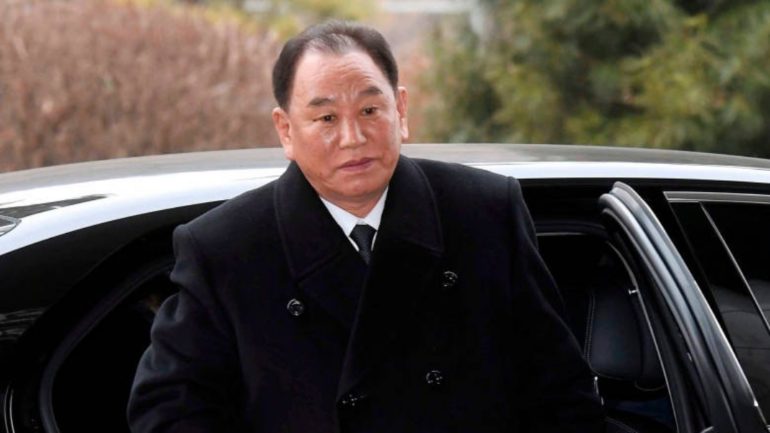 North Korean Vice Chairman Kim Yong-chol is shown in a Feb. 27 photo in Paju, South Korea. South Korea’s Foreign Ministry said Washington and Pyongyang are engaging in talks to arrange a possible summit despite the cancelling of a June 12 meeting. (Korea Pool/Newsis via AP)

Trump himself announced the arrival of the North Korean senior official, considered by some to be leader Kim Jong Un’s right hand man, in a May 29 tweet.

“Kim Young Chol, the Vice Chairman of North Korea, heading now to New York,” Trump said in his tweet. “Solid response to my letter, thank you!”

Kim Yong-Chol, one of Chairman Kim Jong Un’s most trusted officials, is expected to meet with Trump this Wednesday to lay the groundwork for the upcoming denuclearization talks in June.

The meeting is the first progressive move by Pyongyang in the long-term negotiations with the U.S., especially after Trump abruptly canceled the meeting with the North’s leader in a letter to Pyongyang just days ago.

We have put a great team together for our talks with North Korea. Meetings are currently taking place concerning Summit, and more. Kim Young Chol, the Vice Chairman of North Korea, heading now to New York. Solid response to my letter, thank you!

But there appears to be several specific disagreements and differences in the perception of the issues between the North Korean leader and the U.S. president, said James Trottier, a fellow of the Canadian Global Affairs Institute and a former career Canadian diplomat at the Canadian Embassy in South Korea.

“There are fundamental disagreements and a fundamental mismatch in what two sides expect in the Kim-Trump summit,” he said.

“When North Koreans speak about the denuclearization, they speak about it in an abstract term related to the entire Korean peninsula which includes American nuclear-armed aircraft, submarines,” Trottier said.

“But when Americans speak about it, they only speak about denuclearizing North Korea, about North Korea giving up its nuclear warheads, arsenals, and all the nuclear assets and facilities,” he said.

Kim would be the highest North Korean official to arrive in the U.S. since 2000 when Jo Myong Rok, who was said to be the second most powerful person in the country at the time, arrived in Washington, D.C., to meet with then U.S. President Bill Clinton in the Oval Office.

The denuclearization talks, which was scheduled for June 12, was on the brink of falling apart due to several significant disagreements and critical remarks from both sides.

Kim Yong-chol’s visit to the United States is carrying the hope of reviving the on-again, off-again summit between two countries which are technically still at war.

He said Kim Yong-chol is among the most familiar faces to aid Kim Jong Un in many diplomatic affairs as well as accompany him in his international visits.

Kim Yong-chol was in the delegation escorting Kim Jong Un to attend the meeting with the South in the Demilitarized Zone (DMZ) in April and also seen to lead the North Korean delegation to the Pyeongchang 2018 Winter Olympic Games closing ceremony in February.

These preparatory discussions take place to solve the number of disputes between two countries along the way to achieve denuclearization and peace settlement on the Korean peninsula.

Kim Yong-chol’s visit to the U.S. was announced just days after North Korea declared it has finished dismantling its nuclear test site, which was witnessed by international journalists.

“It is a very good public relation move by North Korea,” Trottier said.

“They are trying to improve their relations with other countries, especially with the U.S. and South Korea, and the process (of dismantling nuclear test site) serves that purpose,” he said.