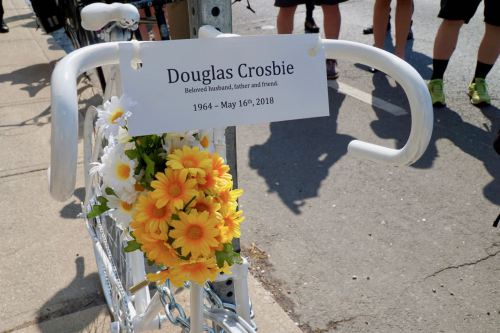 The ghost bike placed at the memorial for cyclist Douglas Crosbie who died in an accident last week. (Jo Koga/Facebook)

There were more calls Wednesday to make Toronto streets safe for cyclists as the funeral was set for 4 p.m. for a cyclist who was struck and killed last week in Leslieville.

Douglas Crosbie, who died on May 16, was one of three GTA cyclists who were involved in accidents the past week.

Daunte Thompson-Bruce, a student at Seneca College was killed Tuesday after a hit-and-run in Whitchurch-Stoufville.

Another cyclist also suffered life-threatening injuries on Tuesday after being struck in the west end at Dundas West and Bloor.

Douglas Crosbie, the Leslieville resident who was struck and killed last week. (Facebook)

These events come as Toronto’s Bike Month is set to kick off next Monday. The month-long initiative encourages Toronto residents to ride more often and raises awareness about cycling in the city.

“Bike Month is a celebration of the joy of riding and an important opportunity to encourage more people to try it out,” said Liz Sutherland, Cycle Toronto’s Director of Advocacy and Government Relations.

A ‘ghost bike’ memorial ride was held Wednesday morning in Crosbie’s honour. Friends, family and strangers made an eight kilometer trip from Bloor Street and Spadina Avenue to Dundas East and Jones Avenue, the site of his crash.

“A ghost bike is a memorial for a fallen cyclist. They are usually spray-painted completely white and may have a nameplate on them near the crash site,” according to the Advocacy for the Respect of Cyclists website.

A police officer accompanies a ‘ghost bike’ ride as it heads to the site where cyclist Douglas Crosbie died on May 16.  (Jo Koga/Facebook)

The aim of the Vision Zero plan is to eliminate fatalities and injuries on the streets of Toronto by 2021 through the implementation of a number of new initiatives.

Some of the measures being introduced to protect bikers include increasing education on biking safely, enhancing bike lanes, and adapting traffic lights to take into account the presence of cyclists. The plan, announced over two years ago, has been unsuccessful so far with Toronto on pace to have its deadliest year on record for cyclists.

“Going into a municipal election this fall, we are keen to see our City’s leadership focus on delivering a true Vision Zero road safety plan for Toronto, including by implementing the 2016 Bike Plan on an accelerated basis,” said Sutherland.

“It allows us to call attention to the change in infrastructure, driving culture, and traffic safety enforcement that we need for riders of all ages and abilities to enjoy the freedom, health, and mobility that comes with riding for pleasure and transportation,” she said.