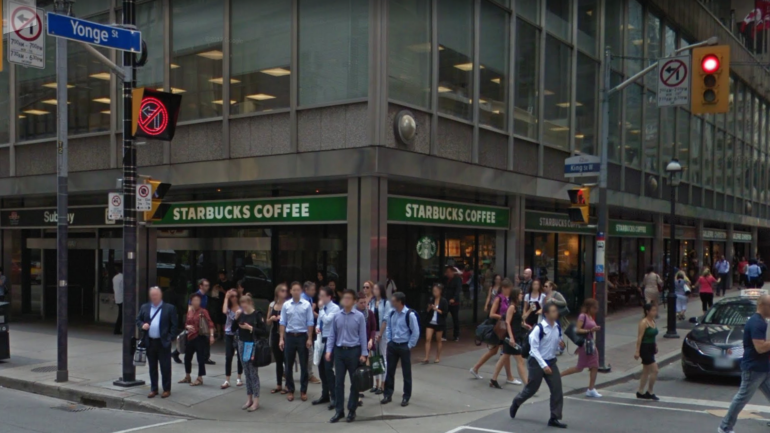 Starbucks on Yonge and King where a customer found a camera in the bathroom. (Photo/Google Maps)

A hidden camera found in a Starbucks bathroom in downtown Toronto is unsettling but not a public concern, said a Toronto Police spokesperson.

A customer at the busy coffee shop on Yonge Street near King Street last Thursday found a camera hidden in an electrical outlet under a sink in one of the store’s unisex washrooms.

“The camera has gone to our intelligence unit and they’re going to analyze the hardware,”de Kloet said.

Less than a week later, another hidden camera was found in a false wall socket in a washroom in a Scarborough business. Although the similarities are unsettling, she said it could be nothing more than a bad coincidence that two hidden cameras were placed in separate bathrooms.

“There are numerous washrooms (throughout Toronto) but we’re not saying if it is or is not related. There is one that we just had in Scarborough although it was something that was located around the same time,” she said.

Although these incidents are less than a week apart, de Kloet said the public shouldn’t worry too much. However, the officer said to be aware and scan a washroom before you use it.

“Anytime that somebody sees something that looks suspicious to please contact police and don’t touch the device. Contact us,” de Kloet said.

Spy cameras or “nanny cams” are easily accessible to the public. Spytech Toronto president Hans School said in an email their camera products do not have any restrictions on who can purchase them and they don’t require any licenses.

“What people use them for is usually to gather some kind of video evidence.  For example, at a business, you might catch a thief on video, or at home, you might catch someone sneaking around on your property,” School stated.

Spytech sells a variety of cameras that can be used for various types of applications. However, the company is aware some people may abuse these devices by using them for other than what they are intended for, he said.

“Here in Toronto, there was a famous case where a landlord was caught a few years ago for putting a camera in his tenant’s apartments. However, it doesn’t happen that often because there are criminal consequences for inappropriately using a spy camera,” School stated.

People typically buy spy cameras to check up on their nannies, protect their valuables, or monitor property, he said.