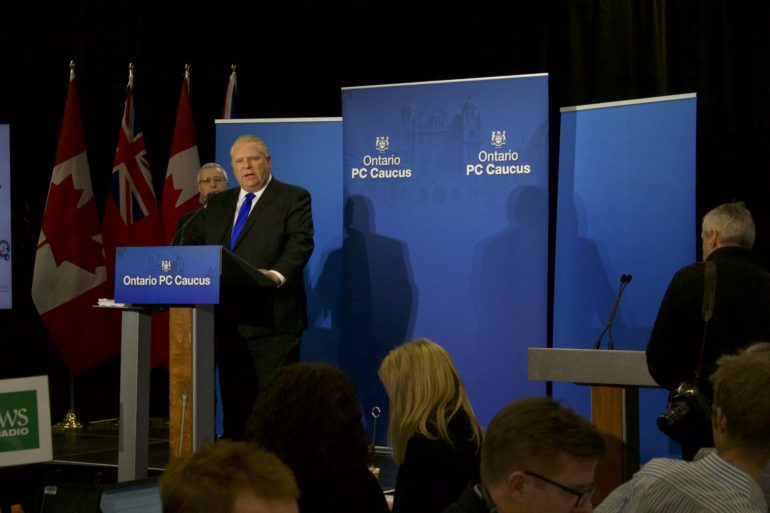 Gas prices across Ontario have been burning a hole in the pockets of many and they’re expected to continue to rise over the summer, hitting record highs.

During the Ontario leader’s debate, Ontario PC Leader, Doug Ford said he would cut the price of gas by ten cents per litre. Ford vowed to make this cut possible by eliminating the cap-and-trade program and by decreasing the provincial HST on gas.

During the debate, Ford said that driving is unavoidable and many Ontarians must drive in order to get work or run errands. He called driving a necessity and said that gas is something that fuels the economy as well.

Ontario NDP Leader, Andrea Horwath responded by saying that carbon is something we must pay for if we’re using it. She said climate change is a serious issue and one that requires immediate attention.

When an audience member asked Ford what he would do to help eliminate carbon emissions, Ford didn’t offer an alternative plan. Instead all he said was that he believes in climate change and that it is man-made.

Kathleen Wynne’s Liberal Government implemented the cap and trade program, which is not a carbon tax. The government defines the cap-and-trade program as an effort to cap the amount of greenhouse gas emissions that businesses are permitted to emit.

The government puts a price on carbon and then sells allowances and permits to companies to emit greenhouse gases.

The program has been designed in an attempt to combat climate change and reward businesses that cut back on their greenhouse gas pollution. The program allows companies to trade, buy or sell their allowances and permits.

However, Ontarians cannot escape paying extra for gas since the Federal government decided that there must be a price on carbon. If Ford decides to scrap the cap and trade program, in the event that he does become the premier of Ontario, then the Federal government would impose a carbon tax that begins at ten dollars per tonne.

“The provincial government can do anything it wants, if it wants to back off on the taxes that are being levied on consumers,” said Dan McTeague, Senior Petroleum Analyst at GasBuddy.com. “That wouldn’t be a difficult thing to do.

“If Mr. Ford decides to do that, if he becomes premier, it would lessen the burden on consumers,” McTeague said. “I for one cannot believe Canadians are standing by and allowing prices to rise, while at the same time accepting a 13 per cent HST.”

McTeague went on to say that it wouldn’t be hard to achieve a 10 cent decrease if you get rid of the 4.5 cents per litre that comes from the cap and trade program, cut down on HST and not follow through with the Liberal’s spending plans. He said gas prices have increased dramatically to an extent where it has created greater unaffordability and unease among lower and middle class folks.

“Those who can afford the least are going to end up paying the most…these higher prices for energy disproportionally affect people who are vulnerable,” McTeague said.