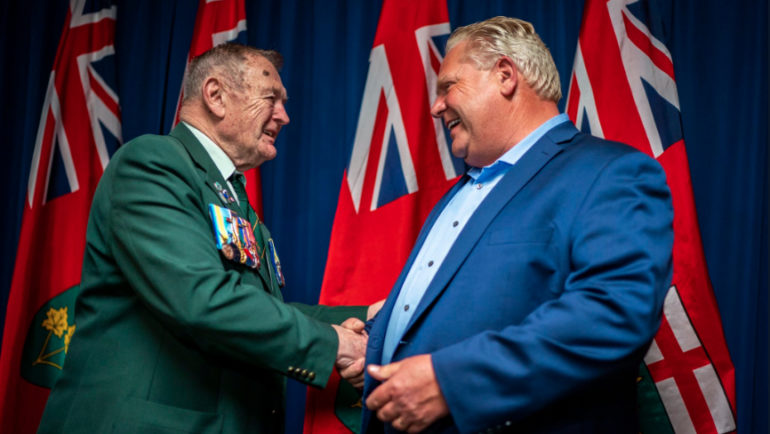 The rally capped off a day of campaigning in the 905 region as Ford attended a meeting at the Abilities Centre in Whitby and announced a plan to keep the Pickering nuclear power plant open until 2024.

Pickering-Uxbridge PC candidate Peter Bethanfalvy took to the stage first to give a brief introduction and said Ontario is ready for change and that the people of the province are fed up.

Bethanfalvy also introduced PC candidates Lindsay Park (Durham) and Rod Phillips (Ajax) who the Tories hope will win seats despite the party’s recent flat performance in the polls compared to the NDP.

“By joining here tonight, we are all fighting for the people,” he said.

Bethanfalvy finally introduced Ford who made his way to the stage to the tune of his original campaign song “For the People.”

The Conservative leader began his speech by addressing the crowd as “my friends” and went on to say that the Liberals and the NDP are both worried and scared and promised that on June 7 the PC’s will send Kathleen Wynne packing.

After taking a couple of jabs at Wynne, Ford switched his focus toward the NDP exclaiming they are “10 times worse than the Liberals” and reminded the crowd of former NDP premier Bob Rae.

He also criticized NDP candidate Laura Kaminker’s 2014 controversial blog post about not wearing a poppy that questioned the validity of referring to veterans as heroes.

“One of their star candidates said that our military folks, our military families and veterans were brainwashed,” Ford said. “They called the poppy ‘landfill’, these are the people that Andrea Horwath has surrounded herself with,” he said.

Given that the Royal Ontario Legion was founded by veterans and continues to serve and honour veterans today, the crowd did not take too kindly to Kaminker’s past remarks.

Ford eventually moved away from speaking about the opposition and focused on how his party will bring change to the people of Ontario.

The Conservative Leader promised to reduce the middle-income tax bracket by 20 per cent, give minimum wage workers a tax rate of “zero per cent” and scrap the federally-enforced carbon tax.

He went on to say his party will reduce the price of gas by 10 cents per litre, reduce hydro rates by 12 per cent, bring back jobs – saying “Ontario is open for business” – and fix healthcare.

“We’re going to actually start listening to the doctors and nurses, we have the greatest doctors and nurses in the entire world right here in Ontario,” he said. “They can tell us how we can deliver more effective, more efficient healthcare to reduce the wait times,” Ford said.

“I always say our seniors built our towns, our cities, our provinces, and built this country, it’s about time we start giving back to our seniors,” Ford said.

Ford wrapped up his speech by saying that his party will put money back in the people of Ontario’s pockets and will bring accountability, transparency and integrity back to the taxpayers of the province.

After his speech, attendees of the rally lined up for a meet-and-greet and photo-op with the Conservative leader.

One volunteer, university student Devon Knight, 25, told Humber News why he supports Doug Ford for the next premier of Ontario.

“I’ve been pondering that question since he got elected and the best I can tell you is, the cabinet that was, they don’t control him as much,” he said. “I’m not going to say he’s an outsider like he claims to be, but he brings something different to the party.

Knight said he was hoping for someone to come into the party and disrupt it and that he didn’t get that feeling from Christine Elliot.

He also said that while he doesn’t take issue with what Kathleen Wynne says, he does take issue with the direction she wants to go and that she represents a type of politician who’s been involved within the party for too long.

“If she were to resign, and the younger generation were to have more say in the party, then I wouldn’t say I would be supportive but I wouldn’t be as critical as I am,” he said.

Knight said that he thinks Andrea Horwath has a lot of good ideas and her Hamilton roots bring a different perspective, but ultimately, he can’t support the NDP’s spending within their platform.

“I agree with her on a lot on the front where she focuses on family but economics, when you put economics in I just believe the Conservatives is just the best way,” Knight said.