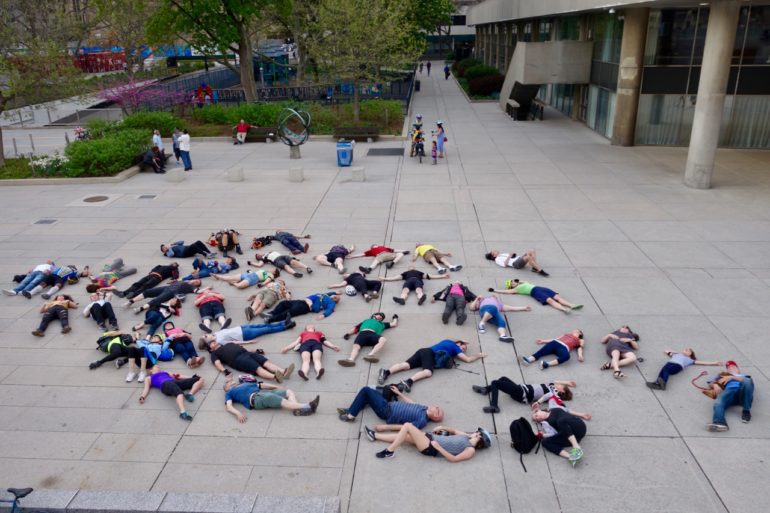 A die-in at City Hall represents the death of cyclists and pedestrians in the streets following the annual Ride of Silence in Toronto (dandy/dandyhorse).

The incident has prompted calls for greater safety measures to be enforced for pedestrians and cyclists.

Jun Nogami, organizer of the Ride of Silence event, said the incident really brings home the seriousness of cyclists being killed by in Toronto.

“While counting the one this morning, we have had five cyclists killed in Toronto, and if we count outside of Toronto, an additional two since the last time we did the ride of silence in May 2017,” Nogami said. “That is seven in just a couple of years, which unfortunately seems to be close to a record. We had another cyclist near Colborne Dr. and Lakeshore Blvd.with reported life-threatening injuries. It is truly concerning.”

Cyclists rode on in silence, some wearing armbands, to Nathan Phillips Square Wednesday night to raise awareness of cyclist deaths, and commemorate those who have been killed in traffic accidents while riding their bicycles.

This year marks the 16th year the event, which first started in Texas in 2003, has been conducted.

Nogami said it’s time greater concern is given to cyclist and pedestrian safety, which he insists is being ignored by city councillor Jaye Robinson and Mayor John Tory.

“When it comes down to brass tacks, and making streets safer, [Councillor Robinson] and city council have routinely opposed even minor measures because there’s the perception that it would slow down car traffic,” Nogami said.

Councillor Robinson, who spearheaded the Toronto Vision Zero challenge encouraging residents to work together on road safety issues,  has spoken of road safety before and hopes people will get on board with the challenge.

But, Vision Zero has many critics .

And yet another cyclist struck, from last night. At least three in under 18 hours.

.@joe_cressy heavy construction at Peter has turned the Richmond bike lane into an absolute death trap. Why was no consideration given to the 100s of cyclists that use this path every day? Some one is going to get injured or worse #BikeTO @JohnTory pic.twitter.com/uQLEaBVm2Y

I can’t imagine this is legal or actually planned by the City. The bike lane is actually open past the sign @joe_cressy @311Toronto @TO_Transport pic.twitter.com/NJzSHGETtn

And, it is not surprising since this incident isn’t one of its kind either.

Sixteen pedestrians and one cyclist are among the 25 people who have been killed on Toronto roads since the start of the year, including the fatality that occurred yesterday, according to a Toronto Police data report.

When asked about the one incident that occurred this week, Nogami expressed uncertainty about the numbers this year.

“Toronto Police may not have counted the cyclist that died in Don Mills who allegedly ran into the back of a parked delivery van and died,” Nogami said. “There were no other witnesses.  It is understanding family wants to leave it closed.  We put up a ghost bike but removed it at the request of the family.”

The numbers mark more than a quarter of the amount of fatalities experienced among pedestrians, cyclists and motorists, ranging in age from 5 to 90, in Toronto from last year (62) between Jan. 1 and Dec. 21, 2017 in the first quarter of 2018, according to a Toronto Police data report spanning between 2007 and 2017.

With the spate of accidents in Toronto, Nogami said the city needs to be more proactive and spread increasing awareness of safety.

“In the case of cyclists at Lakeshore and Colborne lodge, we’ve been pointing out deficiencies to the city since 2014, and nothing has been done,” Nogami said.  “In general, we need to spread public awareness. Drivers need to be more careful and we have to work with the province to increase penalties for people that kill what are called vulnerable road users which includes pedestrians and cyclists.”

Liz Sutherland, Director of Advocacy and Government Relations for the non-profit group Cycle Toronto, agrees that better safety needs to be implemented and calls incidents of this nature being alarming and distressing.

“Cycling in Torono, given the numbers we have, is generally quite safe. I do continue to cycle in Toronto,” Sutherland said. “I would feel much better if there were bike lanes in Toronto and if our grid was better connected.”

Although plans were approved for a 10-year cycling plan in 2016, which is referenced in the Vision Zero Challenge, Sutherland insists that the plan could be instituted quicker.

“There are still some disjointed pieces of cycling infrastructure. Places where bike lanes end.  It would be better to see faster and part of the 10-year bike plan. It takes a while for city to install it,” Sutherland said.

“We’re a couple years in to the 10-year bike plan, and progress has been slow,” she said.

“We would like to see progress faster, so we can make sure we’re more on schedule and key areas that need bike lanes like Yonge Street, Danforth, and Bloor are enforced or improved,” Sutherland said.