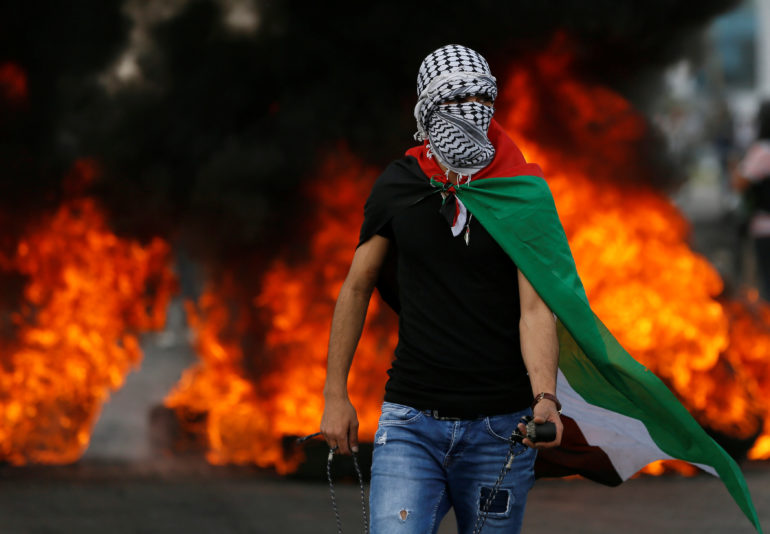 A Palestinian demonstrator stands in front of burning tires during a protest marking the 70th anniversary of Nakba, near the Jewish settlement of Beit El, near Ramallah, in the occupied West Bank May 15, 2018. (REUTERS/Mohamad Torokman)

May 14 marked the deadliest day in Gaza since 2014 as Israeli forces killed 60 Palestinians and injured thousands during a demonstration at the Israeli-Gaza border protesting the opening of the American embassy in Jerusalem.

The conflict erupted a day before Nakba Day, which Palestinians see as a catastrophe because more than 750,000 people were displaced and became refugees when Israel was created in 1948.

Ivanka Trump and U.S. Treasury Secretary Steven Mnuchin stand next to the dedication plaque at the U.S. embassy in Jerusalem, REUTERS/Ronen Zvulun

This protest was in response to the ceremonial inauguration held the same day by the United States in honour of its embassy moving to Jerusalem. The move by President Donald Trump was highly condemned by Palestinians and other world leaders.

The embassy’s move to Jerusalem is significant because the city is sacred to both Jews and Muslims. Both sides want to claim the city as their capital because of the holy sites, including the Western Wall and Haram al-Sharif, considered the third holiest site in Islam.

Trump recognized Jerusalem as Israel’s capital and relocated the embassy, a stance many critics see as an extremely provocative.

Demonstrations were held in Montreal and Ottawa on Monday in support of Palestine.

“A year ago, I was afraid to click attending on a Facebook event about Palestine,” said Sam Hersh, a member of Independent Jewish Voices Canada. “The embassy move is just a roadblock as the actions of the Israeli government become harder and harder to defend.”

“Being critical of Israel in a staunchly pro-Israel Jewish community, I knew the backlash this might cause,” Hersh said. “The fact is that opinion on this issue is changing and to my surprise, people are hungering for change on the issue.”

Deeply concerned by violence in Gaza Strip. We are saddened by deaths + injuries that occurred today + over past weeks. It is inexcusable that civilians, journalists + children have been victims. All parties to the conflict have a responsibility to ensure civilians are protected.

The firing upon of unarmed Palestinians by the Israeli military & resulting death toll is horrific – our govt’s shameful silence must end.

I condemn this violation of I’ntl law & human rights and call on Israel to end the violence & occupation immediately https://t.co/bQBArlvpRH

The UN Security Council held an emergency meeting on Tuesday to discuss the events that took place on Monday. Neither Israel or Palestine are members of the council. France openly condemned the actions of Israel, and reinforced the idea that Jerusalem should be the capital of both Israel and Palestine.

Nader Hashemi, a Toronto-born expert on Middle East and Islamic affairs at the University of Denver, believes Canada doesn’t have a foreign policy toward the Middle East.

“It has a domestic policy,” he said. “The biggest domestic political concern is the strength and the power of the pro-Israel lobby.

“All political parties, particularly the Liberals and Conservatives take this into consideration when talking about this in public,” Hashemi said.

“Given that reality I think it largely explains why there’s such a tepid, weak and morally compromising abdication of Canada’s complain to stand up for human rights,” he said.

Yan Bouzaglou, a pro-Israel activist in Montreal, says the conflict is complex and choosing a side to support isn’t an easy task.

“I think keeping the media in check and using your critical thinking skills from all of the information you receive has to be paramount,” Bouzaglou said.

“Everyone has an agenda and I think that developing your own opinion will go a long way in the battle of ideas,” he said.