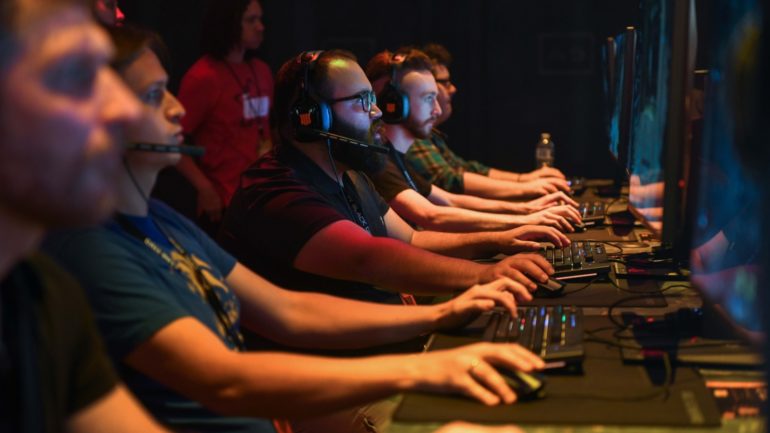 A few days after the Parkland mass shooting occurred, President Donald Trump addressed the issue of children being exposed to violent video games and inappropriate contents.

“We have to look at the internet because there’re a lot of bad things are happening to young kids, young minds,” Trump said. “Their minds are being formed.”

Students are escorted out of Santa Fe High School after retrieving their belongings in Santa Fe, Texas, on May 22. (REUTERS/Jonathan Bachman)

Yesterday, Texas Lt.-Gov. Dan Patrick said the school shooting at Santa Fe High School on May 18 was not because of lax gun laws but violent cultures, especially violent video games.

The question of whether video games have connections with violent behaviour has been under scientists’ microscopes for a long time.

A group of researchers at the University of York in England, led by Dr. David Zendle, with the Department of Computer Science, conducted two experiments.

The two experiments were to test whether or not playing violent video games leads to antisocial outcomes, and violent thoughts or behaviours.

The results showed there was no conclusive evidence to back up the belief that video games make players violent.

“It’s unfortunate that we keep shifting that conversation to violent video games and in regards to mass shooting,” said Dr. Whitney DeCamp, associate professor of Sociology and director of the Kercher Center at Western Michigan University. “There’s no evidence to show that playing violent video games increases the risk of being involved in a mass shooting.”

“People tend not to be worried about the technologies and the experiences they had been growing up with,” he said. “ But older generations seem to like blaming those kinds of things that are newer, which they’re not familiar with.”

DeCamp said there are groups of people that have the tendency towards violence and usually had it before playing violent video games. Video games should not be considered the causation, he said.

“Correlation is not causation, that doesn’t mean playing video games changes their behaviours,” DeCamp said. “That means playing violent video games can cause bad outcomes to the people that are interested in violence.”

But he said there’s also research showing that a correlation between violent video games and violence does exist.

“A study shows short-term (periods) of depression rises due to playing violent video games,”DeCamp said. “We see a short increase of aggressive behaviours but that would be very far from violence.”

Dr. Christopher J. Ferguson, an American psychologist, a professor and co-chair of psychology at Stetson University in Florida, said he saw no convincing evidence linking violent video games and violence.

He said data, in general, was still vague for scientists to categorize which games should be considered violent.

Ferguson said it was easy for people to blame video games because the industry has been creating more violent content and the more violent the games are, the higher the sales.

Parental guidance is important in terms of restricting and filtering the contents their kids would be exposed to, he said.

“Parents should make informed choices about what is right for their families,” Ferguson said.  “Check the ESRB (Entertainment Software Ratings Board) ratings, read game reviews, and parents should play games with their kids.”