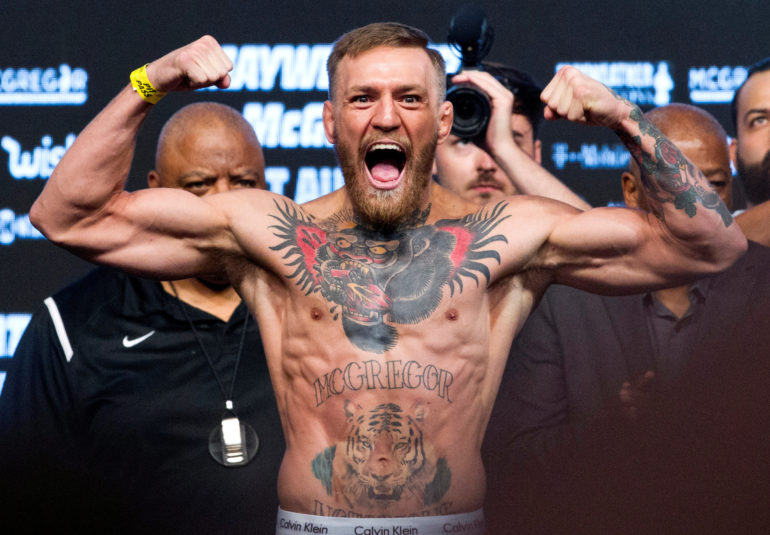 MMA fighter Conor McGregor walks out of the 78th police precinct after charges were laid against him following a late night melee in the Brooklyn borough of New York City, New York, U.S., April 6, 2018. REUTERS/Brendan McDermid

McGregor was arrested and charged with three counts of assault and one count of criminal mischief after his actions put UFC fighter Michael Chiesa in the hospital with a facial laceration.

A decision was made by the New York State Athletic Commission to pull me from UFC 223. I’m devastated to say the least. @Showtimepettis I hope to run this match up ASAP, June 9th in your backyard. That’s all I have to say for now. Much love.

McGregor and his posse were not supposed to attend the UFC 223 media press conference held Thursday at Barclay’s Centre in New York City.

However, he and his entourage attended the conference and pursued a team of rivals in the Barclay’s Centre loading dock, where McGregor picked up a dolly and launched it into the bus of his rival.

McGregor was scheduled to lose his UFC lightweight belt on Saturday to the winner of the title bout between Max Holloway and Khabib Nurmagomedov, who appeared to be the target of McGregor’s rage.

McGregor tweeted a day earlier writing, “you’s’ll strip me of nothing,” before directing an extremely offensive word at the UFC officials.

UFC fighter Conor McGregor seen in handcuffs after being charged with assault by NYPD https://t.co/I7NCUzoTTt pic.twitter.com/7zEQTTMSxR

His actions have left many people disgusted, including UFC President Dana White.

The incident has caused the cancellation of several UFC fights that were scheduled for Saturday.