Artists spark dialogue on how to rediscover the truth 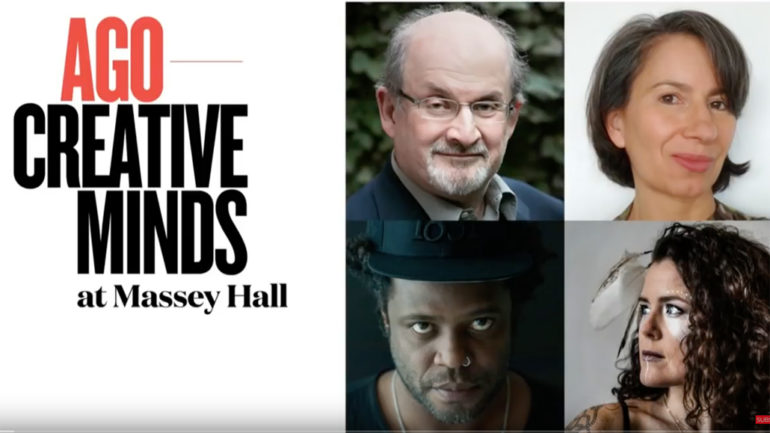 The key to combatting the threat of fake news may lie in art.

Internationally celebrated author Salman Rushdie led a joint talk with artists on April 6 at Massey Hall, discussing the notion of truth. In an era where news sources are under fire, artists may hold the answers in demonstrating right from wrong.

This is an age of impossible things happening which are beyond belief, Rushdie said.

“You have completely idiotic, dishonest websites side-by-side with serious ones and they both look exactly the same and I think people are having trouble sorting out what’s true and very valuable on the internet and what is absolute crap,” Rushdie said.

“There’s a breakdown in our grasp in our reality and I think when that happens in a culture, it’s in great danger,” he said.

The voices of truth and reason in the media are gone and people have been trained to look for the underlying motive, said provocative performance artist Andrea Fraser.

To change this, one of the things that artists, writers and intellectuals have to do is start debates, said Rushdie. You want to be able to at least allow people to start talking to each other in a way that they are not at the moment, he said.

“There’s truth in lies, truth in fantasy, and truth in fiction of course and hopefully art and critical reflection can help us get to the truth to understand what is the need for these lies,” Fraser said. “What does that fantasy represent, and what are the desires, aspirations or fears that the fantasy represents?”

There is something promising to be inspired by writers who are much younger, Rushdie said.

Charles Officer, an award-winning filmmaker, said that it is critical to somehow reconnect with our inner child, our spirits and our hearts.

“What are we setting up for youth? We talk about this idea that they are the future and we have to look after them but then we feed them with bullshit,” Officer said. “In my work, children constantly pop up all the time and I really feel strongly that the truth lies in our inner child.”

If kids are left to be kids and their lead is followed a bit more, people might be in a better position, said 2018 JUNO nominated musician Iskwé.

“It’s important for us, as the generations above, to step back and take our egos and place it on the sideline and really listen to them,” Iskwé said. “We were young too, and we had ideas and I think it’s easy for us to forget that and not give them their voice and time.”