Opportunities for girls in hockey improved in the past decade 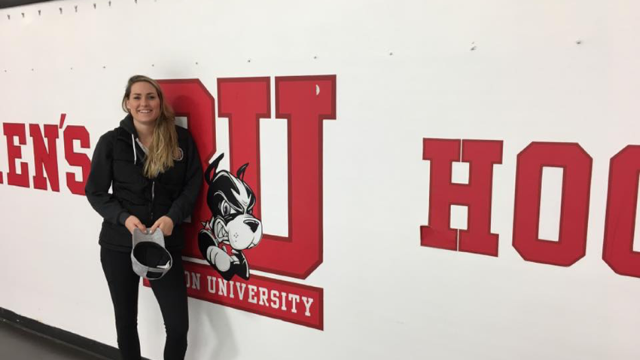 The game has grown and expanded to the point that opportunities for women exist that weren’t there a decade ago.

Carly Warren, a former Boston University women’s hockey player, has a strong passion for the sport.  When she was a kid she wanted the same opportunities the boys had.

Warren, 27, who played minor hockey while growing up in Calgary, said girls once had limited exposure to the sport. Calgary had very small number of girls registering, which forced her to play in the boy’s league until her second year in bantam.

“It was really, really challenging,” Warren said. “When I was growing up, girls hockey didn’t really exist. Going the boys route and being the only girl, it had its challenges.”

Being the only girl on a boys team made it  hard for Warren to feel like she belonged.  She would have to change in different places, away from the rest of her male teammates.

“They didn’t have girl change rooms so I would get changed in the bathroom or in a janitors closet. One time I got locked in the janitor’s closet,” she said.

Warren’s skill in pee wee hockey (under 13) team selections got her a place on the top boys team. Instead of getting praise and being treated like a fellow teammate, she felt rejected by hockey parents.

“There were parents that went to the head of the association to complain that a girl shouldn’t be able to make the top boys team. That was when parents no longer coached,” Warren said.

“They hired coaches to come in to complete the evaluation, there was no bias,” she said. “They just picked the team based on the best skill and on how everybody would work together. At that age it was hard and took a big toll on my self esteem.”

The parents did not only isolate her, but her teammates made her feel unwelcome as well. From the bus trips, to learning to play as a team in practice, Warren said she was treated differently than the others.

“I was always picked last for drills if we would have to partner up. On bus trips the boys would sit together and pair up, and I would have to sit up front with the parents,” she said.

Warren said this generation is getting much better treatment and it’s due to how well girl’s and women’s hockey has grown. From the Olympians making the sport popular to the former players coming back to coach girls of all ages, everybody is doing their part in helping boost the game.

“They can create different skill levels now,” she said. “Even if you are learning, you are still among a group of girls that are challenging you to get better at that level.

“The same is if you are playing midget AAA with the women’s side. There is enough talent there that you are constantly being pushed to get better and develop your skills,” she said.

Becky Kellar, a four time Olympian with three gold medals and a silver medal, said after the Olympic games in 1998 and 2002 female registrations spiked in North America.

Not only are women coming back to help girls learn the sport, but men have done their part in helping the sport grow as well.

“Even men that have gone through hockey and are very familiar with the rules and know how to coach are coaching the women’s side,” she said. “The big piece that has helped accelerate the sport as quickly as it has is the coaching has been, I would say pretty comparable between the males and females.”

Sami Jo Small, three time Olympian and current goalie for the Toronto Furries, can see the change. Girls can walk to the rink and feel like they are a hockey player, not a girl who plays hockey.

“Now you see a young girl with a ponytail walk into the rink and it’s not a big deal, she is just there to play hockey and it’s not a girl playing hockey she’s just a hockey player,” she said. “That’s a very interesting transformation that’s happened not just in hockey but in sports and society in general in Canada in the last 20 years.”