Justice sought for Molly, the rescued pig killed by owners 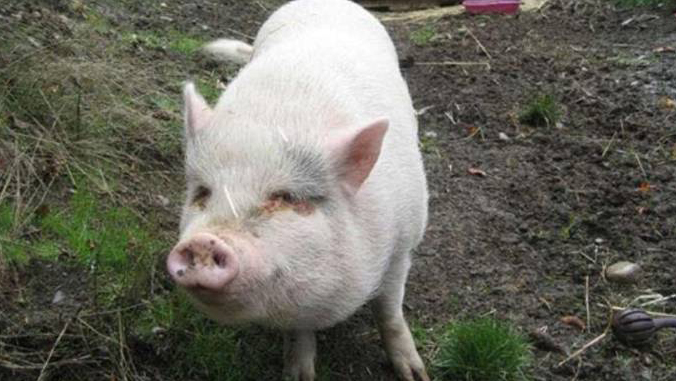 Molly, a potbelly pig that was adopted from the SPCA and then killed and eaten by her new owners. (Facebook)

A rescue potbelly pig made international headlines after she was eaten less than a month after she was adopted from the B.C. SPCA.

And Camille Labchuk, the executive director of Animal Justice, wants to start a national conversation about people’s treatment of animals after Molly’s story came to light.

She said animals are protected from being tortured, suffering, injuring or distress, but the law doesn’t prevent them from being killed.

“It’s legal for a person to kill an animal that they own,” Labchuk said. “Animals in Canada are considered to be the property of their owners, they don’t have the right for their own life.”

The Cowichan and District branch of SPCA rescued Molly as part of a cruelty investigation, and she was nursed back to health under its care.

The three-year-old Vietnamese pig was adopted in January by a local couple with promises to give her a home.

But a few days after the adoption, the new owners posted Snapchat photos and videos of them seasoning her flesh while preparing to eat her, according to Labchuk.

The news raised the ire of many people, who began to demand justice for Molly on social medias and asked for legislative changes.

Isabela Campello, a 23-year-old vegan, was one of the hundreds of people who were shocked by Molly’s story. She said she made changes in her life as to not contribute to the factory farms industry.

She said she became vegetarian about 11 years ago, but from the last three years she hasn’t consumed any animal product.

“I spent all these years not eating animals, but then I saw how the animals are suffering, how the world is suffering because of all the factory farms,” Campello said. “I’ve never felt better, never felt healthier and happier to do be doing my part.”

“I feel more human now that I don’t eat animals anymore,” she said.

“Toronto is one of the most amazing places to be if you are a vegan,” Campello said. “There are options everywhere in anywhere, because there are so many different cultures here.”

Campello said she went on a tour last year at the Farmhouse Garden Animal Home – in Uxbridge – and she could see how animals are treated at a farm where animals were once killed and butchered. It has since become an animal sanctuary that produces organic products.

“The owner told us how he felt bad to take care of animals and in the end of the day kill them,” she said. “He decided to change his whole business and to go vegan, and not kill animals but keep taking care of them.”

Molly’s new owners, known as Austin Manson Forget on Facebook, published on his social media a message apologizing for his action.

“I understand that I will not be able to completely make up for what I have done, but I do promise that Molly died humanely and it was not done for fun or for sport,” he said.

Forget said he didn’t adopt Molly with the intention of killing her, but she became aggressive with his partners dog and he decided to put her down.

He finished his post by saying he is sorry.

“I don’t believe that matches with our society,” she said. “We’re evolving morally.”