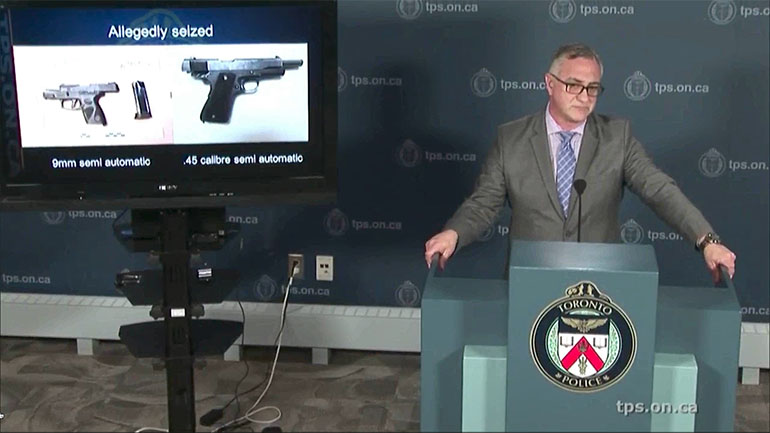 Toronto Police held a press conference at their downtown headquarters Thursday morning to update the public about the investigation.

It is alleged that two men forced a 19-year-old woman into the sex trade during Jan. 8 to Feb. 10.

The men allegedly took photographs of the woman undressed, created ads for sexual services and posted them on a website that has been known for sexual solicitation ads.

The men allegedly took the woman to various Airbnb rentals across Toronto, Peel, York and Durham Regions, where she was forced to perform sexual services for clients, said Detective Sergeant Nunzio Tramontozzi from the Sex Crimes and Human Trafficking Enforcement Team.

Airbnb is aware of the incidents that have taken place within their facilities and say they are taking action to prevent these types of cases.

“The safety of our global community is our priority, and we take the challenge of confronting human trafficking very seriously.

“Airbnb is strongly committed to working with law enforcement officials and anti-trafficking advocates to prevent these horrible crimes and to help hold criminals accountable.

“In this case we partnered with the Toronto police to help arrest the suspect,” an Airbnb spokesperson said in a statement provided to Humber News.

Detective Tramontozzi added that the men took the woman’s identification and forced her to turn over all the money she earned.

“They take [a victims] ID and phone in order to isolate them, so that they are only reliant on their pimp,” said Tramontozzi.

On Feb. 5, it is alleged that the men took the woman to Idlewood Inn on Kingston Road in Toronto where the men and woman got into an altercation after she told them she no longer wanted to be an escort.

One of the men allegedly pulled out a .45 calibre semi-automatic handgun during the heated altercation, resulting in the woman getting shot in the buttocks area. The men then transported the woman to an unknown location in Toronto and refused to seek medical attention for her wound, Tramontozzi said.

It is alleged that between Feb. 5 and Feb. 10 the men transported the woman to several locations, while not treating her gunshot wound.

The woman managed to escape and attended a local hospital for treatment, said Tramontozzi.

Tramontozzi told Humber News that it is very hard for women to escape the human trafficking industry and that they have to find it within themselves to reach out and seek help.

“48 hours is all it takes,” said Tramontozzi. The internet is a dangerous lure and one of the “biggest ways” woman are lure into human trafficking starts over the internet. “[Woman] put their whole life stories on the internet,” he said.

He advised that anyone that needs to talk should reach out to law enforcement, adding that victims are not required to give a detailed statement regarding their pimps.

“These men are mass manipulators and if they find vulnerability, they exploit it.”

On Feb. 20, members of the Human Trafficking Enforcement Team (HTET) located Tyrel McLean, 18, in Hamilton and arrested him.

On the same day members of HTET and the Emergency Task Force executed a Criminal Code search warrant in Brampton. During the subsequent search of a vehicle, a loaded 9mm semi-automatic handgun was located, as well as a large quantity of money and ammunition was seized. Dante Thaxter, 18, was arrested.

Both men were charged with 29 different accounts of human trafficking and firearm possession charges.

The men appeared in court Wednesday at 1911 Eglinton Avenue East in room 412.

Police are concerned there may be other victims.

“Often victims see that the pimps are in custody, [so] they feel better to come forward,” said Tramontozzi. “The only way we’ll know is if they do come forward.”

Photographs of both men have been released.

Police would like to encourage all affected individuals to come forward and report Human Trafficking occurrences to police. We want to make sure that everyone has access to support services and an exit strategy, regardless of their decision to proceed criminally.

Anyone with information is asked to contact police at 416-808-7474, Crime Stoppers anonymously at 416-222-TIPS (8477), online at www.222tips.com, text TOR and your message to CRIMES (274637), or Leave A Tip on Facebook. Download the free Crime Stoppers Mobile App on iTunes, Google Play or Blackberry App World.