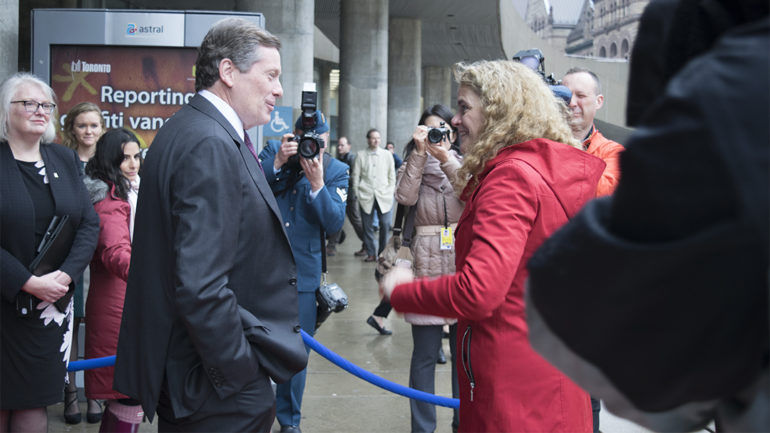 It was an honour to host Her Excellency, The Right Honourable Julie Payette at City Hall as part of her first official visit to Toronto. pic.twitter.com/2rwS5gxEcN

This is her first official visit to Toronto since becoming the 29th Governor General last October.

She was welcomed this morning at Queen’s Park by Honourable Elizabeth Dowdeswell, Ontario Premier Kathleen Wynne and the Honourable Dave Levac, Speaker of the Legislative Assembly of Ontario.

The welcoming ceremony included a military band, a 100-person guard of honour, the “Viceregal Salute” and a 21-gun salute from 4th Canadian Division/Joint Task Force and the Governor General’s Horse Guards.

(Canada.ca) Julie Payette prior to the launch of mission STS-127.

Later in the afternoon, Gov. Gen. Payette presented almost 60 Canadians with honours, recognizing their excellence, courage and exceptional dedication to service. She will then be attending a reception in the city’s discovery district, hosted by Premier Wynne, where she is to deliver remarks.

Above many other achievements, she has received many distinctions, including 27 honorary doctorates, and can speak in six languages.