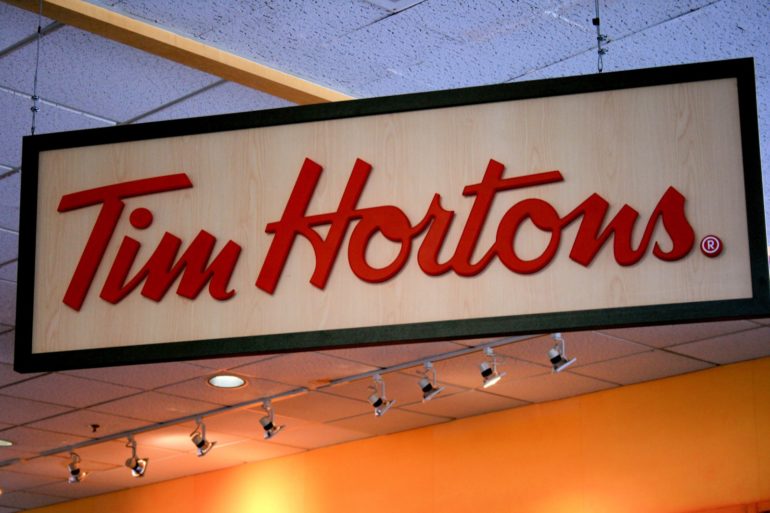 Over 50 protests have broken out Friday across Canada to protest against cutbacks on employee perks at various Tim Hortons locations.

The protests are part of what is being referred to as the “national day of action”, in retaliation for the treatment of workers after the minimum wage hike.

Some Tim Hortons franchisees have been under fire since early January.

At a Tim Hortons location in Whitby, franchise owners Jason and Susan Holman put up a notice in November, telling workers to contact Premier Kathleen Wynne if they have any issues or concerns.

“I encourage you to let her know how your workplace will change as a result of her new law and that you will not vote Liberal in the coming Ontario election in June 2018,” the statement reads.

Workers from the Holman-owned location reached out to the Durham Canadian Union of Public Employees District Council (CUPE 9112).

“I feel for the low-wage workers,” said Tiffany Balducci, President of CUPE 9112 and fourth vice-president of CUPE Ontario. “The workers work for the Holmans, not the government,” she said explaining how it wasn’t fair that the Holmans were bringing politics into the workplace.

Balducci said that several other minimum-wage workers have gotten in touch with CUPE and that the organization is trying to help them as well.

Commenting on the incident, Labour Minister Kevin Flynn said, “People who work 35 to 40 hours a week — people trying to make a living and take care of their families — deserve to be paid a fair and decent wage; they deserve to see the benefits and protections of our labour legislation. They don’t deserve to be treated in a way that makes them feel less than any other worker or less than their employer.”

Humber News contacted the Great White North Franchisee Association (GWNFA), which says several Tim Hortons franchise owners are a part of their association. However, they refused to comment on the situation until it is investigated.

When I said franchise owners should take their fight to me, I didn't mean they should use their employees as pawns. I'm happy to talk to any business owner about the minimum wage but taking it out on employees is not fair and not acceptable. https://t.co/nuHvNnkoun

Previously, Restaurant Brands International (RBI), the multinational corporation that owns Tim Hortons issued a statement when several Tim Hortons employees revealed that their perks were being taken away. In the strong-worded statement to the media, RBI called franchise owners who were applying cutbacks, a “rogue group.”

“This is the time we should be celebrating,” said Balducci, pointing out that the hike in minimum wage is a historical move. “Instead there are more things being stripped away from low wage workers.”