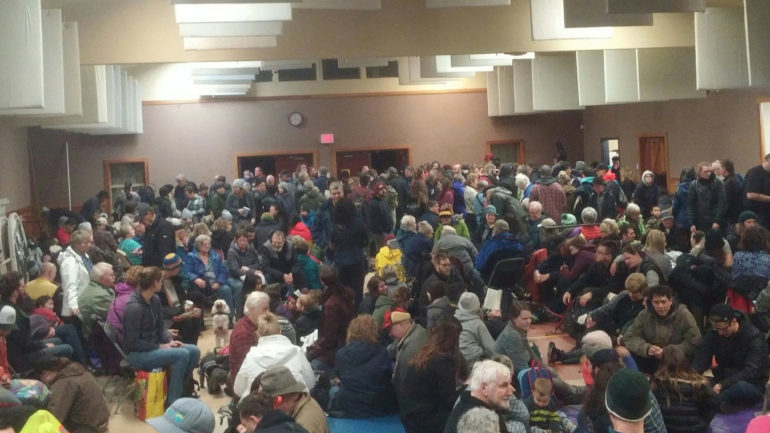 People are seen waiting at the Tofino Community Hall during a tsunami warning, in British Columbia, Canada January 23, 2018 in this image obtained from social media. (Twitter/@CAT_LEMPKE via REUTERS)

By: Omar Jaber and Joe Amodio

Residents of the British Columbia coast had a rude awakening overnight as sirens rang out, warning them of an impending tsunami.

The warning came following a 7.9 magnitude earthquake that shook parts of Alaska early Tuesday morning with a depth of 25 km.

Residents along the coast of B.C. who live below the 20 meter mark are in what is called the tsunami inundation zone. They began to evacuate their homes along with all of the visitors who were staying in hotels and lodges down by the beach. They followed the evacuation route signage leading them downtown to gather at local community reception centres.

Tofino, B.C. Mayor Josie Osborne spoke to Humber News on what took place in her town this morning, and how they handled the situation.

“We got the alert just around 2 a.m and within 5 to 7 minutes the beach sirens went off in Tofino. We have three sirens that are down at the low lying areas and I could certainly hear them from my own home where I was quickly gathering my grab and go kit and getting ready to head downtown,” she said.

Mayor Osborne said that the people of Tofino kept their composure and handled themselves accordingly.

“I’m sure that once everyone realized what was going on and it wasn’t a drill, its hard to imagine that a moment of panic doesn’t initially set in but people in Tofino are well prepared,” she said “In the last five years i’d say we really made strides with preparedness and being able to respond in a calm and effective manner. So things went really really well.”

Well done, #Tofino! Calm, orderly and so helpful to neighbours, friends, visitors and pets! Thank you for taking care of each other. #tsunami #beprepared pic.twitter.com/089ZSHWQCL

B.C.Minister of Public Safety, Mike Farnworth, made a statement after the tsunami warning was called off.

“Overnight, several communities along the coast activated their emergency plans and evacuated those at risk,” he said “although the tsunami warning was eventually suspended, this event demonstrates that coast warning systems do work.

Despite the tsunami warning being suspended, residents were still shaken up after a chaotic morning.

Many residents also took to twitter to say that despite sirens going off, they remained asleep.

Geophysicist Mika McKinnon told Global News that if you live in coastal B.C. and did not get woken up by an emergency alert, you really need to check your settings so that next time something happens you get woken up so you know to evacuate.

In the meantime, B.C. residents are happy to be safe, and back in their own homes after an event that could have been much more catastrophic.

“In this case they did downgrade it from a warning to an advisory and then they canceled the entire thing. So that’s the point when everyone sighs a big breathe of relief and cheers,” said Mayor Osborne.