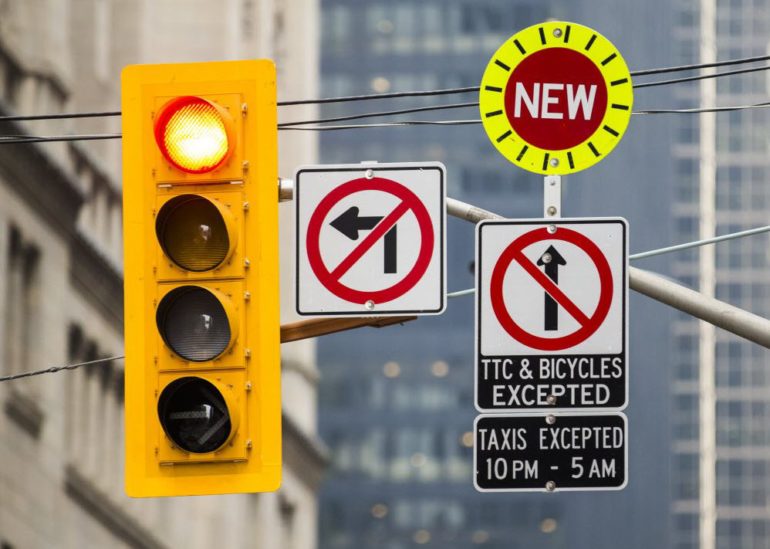 Toronto Mayor John Tory has launched a design-build competition for the public spaces along King Street, to placate business owners who’ve been complaining about loss of revenue due to the streetcar pilot project.

The competition, called ‘Everyone is King’, invites submissions to animate the new curb lane public spaces on King St., and hopefully draw pedestrians to the downtown Toronto street.

“I am pleased we have seen improvements to the efficiency of King Street as part of the downtown transportation network,” said Tory.

“I want to make sure that King Street remains a good place to eat, shop, gather and be entertained during this pilot,” added Tory.

The purpose of the Pilot Project is to give priority to streetcars along what is the busiest surface transit route in the city, and making King Street less congested.

Vehicles are prohibited to travel straight through King Street between Jarvis and Bathurst, and left-hand turns are also banned on the stretch of King Street.

Taxis are able to travel straight through at all intersections daily from 10 p.m. to 5 a.m.

The City of Toronto and the Toronto Parking Authority have also introduced a new $5 discount on parking in the surrounding area using the Green P app, using a specific promo code.

Although traffic flow has improved, many King St businesses have complained that revenue has been lost

Agathe Alexakis, owner of Penelope Restaurant, hadn’t heard the details of the design contest when contacted by Humber News, but said the pilot project is a shame and a disgrace.

“It’s absolutely absurd this is bad for business, we’re losing customers, revenue and this whole thing is just making our lives so much more difficult as well as our customers,” said Alexakis.

“We’re the only city in the world who has this initiative in place, and the elderly people cant even park their cars on the street anymore, maybe they should take this Pilot thing elsewhere,” added Rodgers.

City News released a statement indicating that some restaurants and hotels have seen as much as a 52 per cent decline in revenue since the pilot project came into effect Nov. 12.

José Luis Hernandez, owner and manager of Los Colibris, a Mexican sports bar located on 220 King St. West, is disappointed with the city, and doesn’t want to lose his business just to make ‘traffic flow.’

“I have been putting my own money into my business to keep it alive and all the city wants to do is create a traffic free area at the cost of small businesses like mine,” said Hernandez.

“My numbers have decreased since this project has been put into place, so I want to see the city do something about it instead of just worrying about the flow of traffic,” he added.

Mayor Tory said that King street is more easily accessible by transit than ever before.

“The streetcars and the 65 thousand people on them more importantly were moving slower than people walking down the sidewalk, and that couldn’t not continue,” said Tory.

Councilor Joe Cressy says that King Street was once broken, and as a city they had to fix it to make a more reliable commute for Torontonians.

“King is dynamic, just look at the theatres right behind us,” said Cressy during a press conference.

“Today King is back, today 30 thousand people right here in King Spadina live here. More than 60 thousand people work here and we will continue to ensure Kind remains a thriving district,” he said.