Another record for Raptors DeMar DeRozan 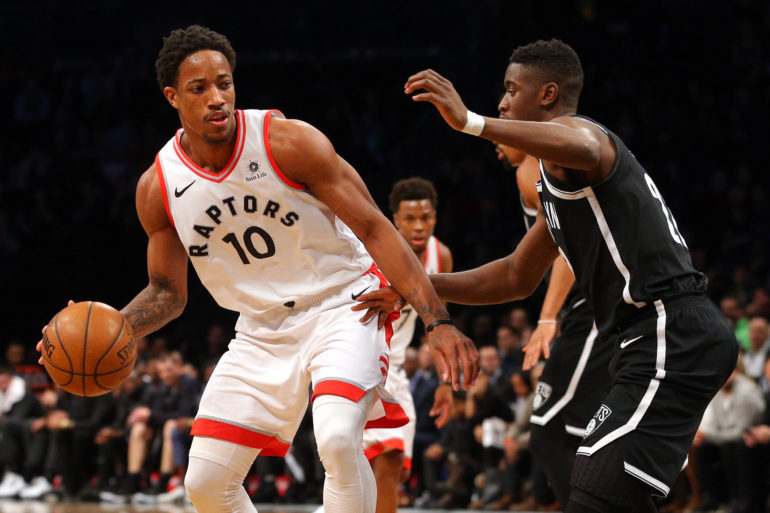 With a fearless drive to the paint, DeMar DeRozan dropped a clutch floater for a three-point play with 26 seconds remaining in overtime to give Toronto the 114-113 win over Brooklyn on Monday night.

He managed to tally a game high 35 points, making the win his 91st game with over 30, matching Vince Carter’s record for the most in Raptors franchise history.

DeRozan has been playing big lately.

“I just want to continue to get better, every single game,” DeRozan said to reporters after the win against Brooklyn.

Before taking on the Nets yesterday, DeRozan was named as the Eastern Conference Player of the Week.

Guard @DeMar_DeRozan has been named Eastern Conference Player of the Week for the third time this season. DeRozan scored a @Raptors franchise-record 52 points Jan. 1 vs. Milwaukee. #NBAVote

This is the third time the Toronto guard has earned the honour this season and the eighth time he’s been named player of the week in his nine-year career.

“Look at how many years he’s been in the league now,” Raptors head coach Dwane Casey said while speaking to reporters post-game. “You got to trust him. We do trust him.”

DeRozan has been named Player of the Week more times than any other Raptor, including Chris Bosh who earned the honour seven times.

“Everybody criticized him for playing ISO basketball but again, you get the ball in the best player’s hands,” Casey said.

The highlight of DeRozan’s historic week came on New Year’s Day when he set the Raptors franchise record, scoring 52 points against Milwaukee.

The record was previously held by Vince Carter who scored 51 points against Phoenix in 2000, and later tied by Terrence Ross against the Los Angeles Clippers in 2014.

“It’s cool to get the record and pass a guy I looked up to a kid,” DeRozan said. “It’s nothing but aggressiveness and going out there and wanting to win.”

DeRozan continues to define his legacy as one of the all-time Raptor greats.

Game on the line, go to your All-Star.

DeRozan is also on pace to make his fourth All-Star appearance since 2014.

In the first returns revealed on Thursday, DeRozan accumulated over 250 thousand All-Star votes, which is the second most among Eastern Conference guards.

“The young man’s an All-Star. We have two All-Stars, he and Kyle (Lowry), and tonight DeMar DeRozan played like a superstar,” Casey said.

DeRozan and the Raptors look to continue their success, returning to the Air Canada Centre tonight to host the Miami Heat, as Toronto seeks their sixth straight win.

“All I care about is winning,” DeRozan said. “Every time I’m on the floor I do whatever I can to win.”