Another messy commute ahead as flash freeze hits GTA 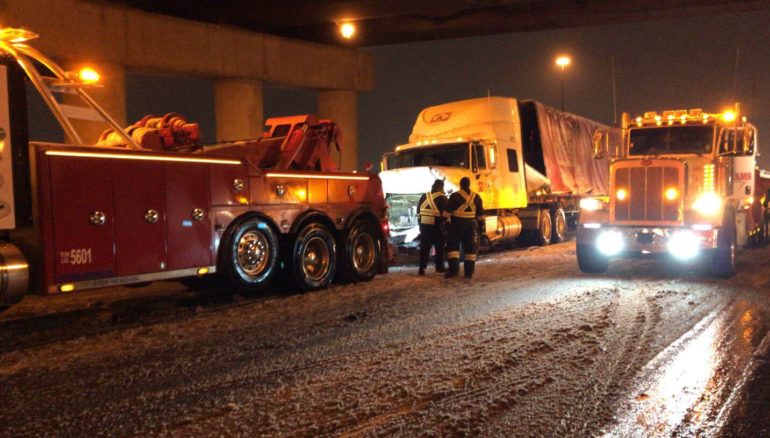 Following a slew of weather-related collisions within the last 24 hours, Toronto Police are warning commuters to take extra precautions as conditions worsen.

Environment Canada has issued a special weather statement for the City of Toronto with temperatures dropping drastically from 2 degrees to -11 degrees by tonight, expected to cause a flash freeze.

The weather has changed drastically over the course of the day, from mild and rainy this morning into freezing rain and snow by the afternoon.

“When you go from snow to rain or you go from freezing to melting, it’s quite a different situation than if you just drop 20 degrees from -20 to -5 or from plus 5 to plus 20,” Phillips said.

On Thursday the GTA was hit with milder than usual temperatures and afternoon showers that continued into Friday morning.

A week of wild weather and numerous accidents

Dizzying changes in the weather this week brought on a rash of traffic incidents across the city.

On Friday, a 10-year-old boy was struck by a vehicle in North York and was rushed to hospital. Police say the child’s injuries are non-life-threatening and the weather is being investigated as a possible factor in the accident.

On Thursday, police responded to reports of 10 pedestrians and one cyclist struck in eight separate incidents between the hours of 5 p.m. and 7 p.m.

One of those victims was a woman in her 40’s who was hit by a TTC bus near Yonge St. and Eglinton Ave. and is said to be in serious but non-life-threatening condition.

Low visibility and reflection of light on wet roads— Phillips says— are some the factors that would contribute to a higher number of confrontations between drivers and pedestrians.

“Since yesterday, we’ve seen visibility down to as low as 5 or 6 kms. instead of the 24 kms. that you would often see without this weather,” Phillips said.

High winds are blowing salt off of the roadway.Drivers-slow down leave lots of space.Pedestrians- the sidewalks will be very slippery soon, take a step back from the road or curb,it will help keep you safe. pic.twitter.com/kcVIzQa3xZ

Since there was no break between the rain this morning and flurries this afternoon, Phillips said the concern for tonight will be less about pedestrians confronting motorists and more about confronting slippery surfaces.

“When transitioning from one to the other with no break, there’s no chance for the surfaces to dry out and so it just adds to the treachery of driving or walking or just trying to get along.”

Toronto Police are urging pedestrians and motorists to be extra careful during their commute tonight due to the icy conditions.

Toronto Pearson Airport has also issued a travel advisory, warning some flights may be impacted by the inclement weather. They’re asking that travelers double-check their flights for delays or cancellations before making their way to the airport.