91-year-old Regent Theater up for sale 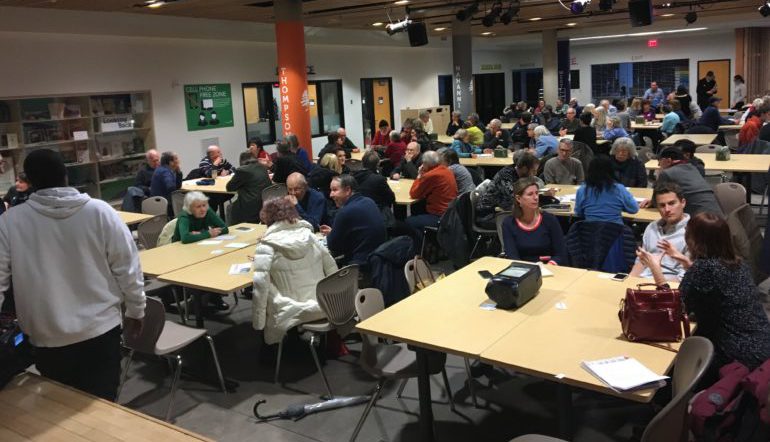 The 91-year-old Regent Theater, on Mt. Pleasant Ave. north of Davisville, is up for sale. More than 150 people gathered at a local high school on Monday night to discuss preserving the theater’s cultural heritage.

“The theater has hosted everything from cinema, live theater to a variety of concerts, it also has a historical marquee, its an iconic part of our community,” said city Councillor Josh Matlow.

“It would be such a shame that it is now for sale by the owners to see it get demolished or at the very least a generic pharmacy.”

Matlow said the purpose of the meeting was to explore options that would not only “retain its built form or its purpose as a theater but to even keep cultural hubs active.”

“Seeing so many people join hands together I know that I am not alone.  A large community coming together with all sorts of ideas, expertise, relationships that they want to work to come with ideas”

The meeting started with the Councillor sharing his feeling and suggestions about the theater and led to people forming groups to discuss their ideas of how to sustain the building.

“The building itself is beautiful, I feel we should keep it as a theater of some sort. Its big enough, about 500 seats, which means there’s room for a small theater for not just movies, maybe live music”, said Tom Scalan, a resident trying to save the building.

Tom said he’s “emotionally attached” to the theater as he has spent 20 years of his life attending various events at Regent. “I’ve lived in the neighborhood for about 20 years, I go to the theater a lot and I think its just a great asset to our community.”

People at the meeting wondered if there are realistic ways to help and their concerns were addressed by Matlow. “We need to come up with a plan before we go to the owners and say that they don’t need to make this into some random shop. There are financially realistic ways to sustain this as a theater, whether by the current owners or to sell to a non-profit organization.”

When asked if the city is helping the community to raise ideas or funds for the property Matlow said “the city could certainly support by securing a loan for a ‘Not-for-Profit’ or a charity that might want to work on this.”

Samantha Ferdi, a community member, said the owners are known to be open to new ideas or ways of being able to save the space, “they just want to get a fair value for their location and rightfully sold.”

The meeting was ended with several ideas and people said they were willing to do everything possible to preserve the property.

“I identify Regent Theater as an important cultural space in the heart of midtown Toronto, so we certainly need to put both our words and our money where are studies are, which says we should be protecting our space” said the Councillor Matlow