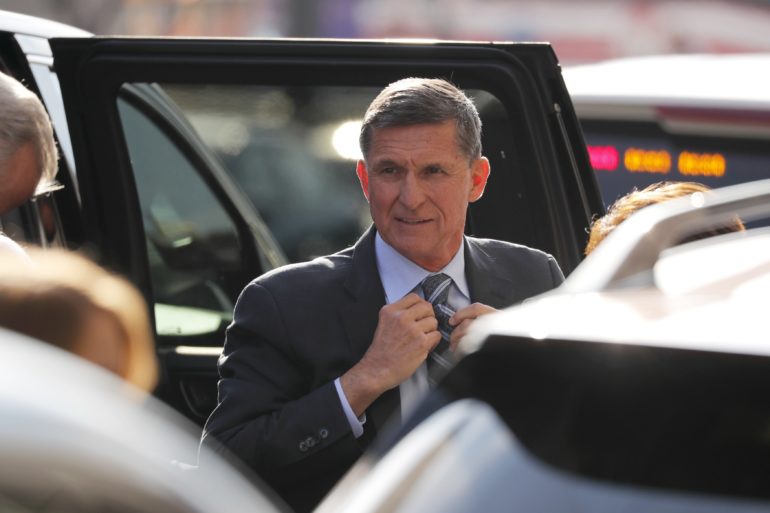 U.S. President Donald Trump’s ex-national security advisor Michael Flynn has pleaded guilty to lying to the Federal Bureau of Investigation (FBI) about two conversations with the Russian ambassador in December.

Special Counsel Robert Mueller has charged Flynn with one count of “willfully and knowingly” making “false statements” to the FBI. He appeared in federal court Friday morning to make his plea and is cooperating with the investigation.

It’s the latest to come out of Mueller’s investigation into alleged Russian interference during the 2016 presidential election.

All of those charged are former Trump associates.

In a written statement, Flynn said he’s “working to set things right” and he “accepts full responsibility” for his actions.

Papadopoulos is the only one who plead guilty to lying to the FBI about connections to Russian government officials. He took a plea deal and agreed to cooperate with the probe, reducing his sentence of up to five years in prison to a maximum of six months.

According to documents from the Special Counsel, Flynn lied about conversations with Russian officials that both took place in December.

Flynn claimed that on Dec. 22, 2016, he did not have a conversation with the Russian ambassador to delay or defeat a vote on a United Nations Security Council Resolution when in fact he did.

Flynn also falsely claimed that on Dec. 29, he never asked the Russian ambassador to “refrain from escalating the response to sanctions that the United States had imposed against Russia that same day.”

Retired U.S. Army Lieutenant General Flynn served in the military for 33 years and was appointed as President Barack Obama’s Director of the Defense Intelligence Agency from 2012 until Flynn’s retirement in 2014.

In January, Flynn was appointed as Nation Security Advisor to President Donald Trump but was forced to resign within a month of service, admitting that he lied about his communication with Russian government officials.

Russia’s suspected involvement in the presidential election dates back to as early as last summer. In July 2016, WikiLeaks posted nearly 20,000 emails between Democratic National Committee (DNC) officials including those from presidential candidate and former Secretary of State Hillary Clinton.

WikiLeaks didn’t reveal who provided them with the hacked emails but researchers for the DNC quickly said it was the work of Russian hackers.

The FBI then announced that they would begin investigating the claims made by the DNC, intensifying conspiracies that Russia was meddling in the presidential election to aid Trump.

In August, Paul Manafort resigned from Trump’s campaign committee. His exit came after reports exposed Manafort’s business dealings with pro-Russia leaders in the Ukraine and millions of dollars in secret cash.

Despite the flurry of Russian allegations, Trump was elected president of the United States on Nov. 8, 2016.

A month later, President Obama imposed sanctions against the Russian government for attempting to interfere with the election by leaking the DNC emails.

By March 2017, then-FBI Director James Comey confirmed that the Bureau was investigating Russian interference in the 2016 election.

Since then, President Trump has vehemently denied all allegations of colluding with Russia and has called the investigation a “witch hunt.”

Flynn’s guilty plea is another blow to President Trump’s attempts to distance himself from the investigation.