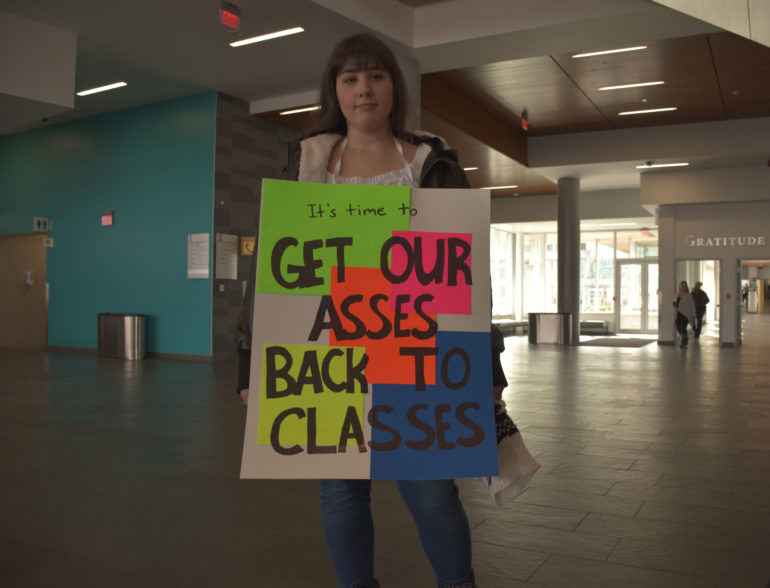 Business management student Sarah Richardson organized a sit-in at the Humber North campus to get students back in the classroom. (Tyson Lautenschlager)

By: Julie Arounlasy and Tyson Lautenschlager

Ontario college students are still out of class after faculty voted against the latest contract offer.

The results of a two-day vote came out to the public this morning with 86 per cent of the 95 per cent of faculty that voted, voting against the offer.

“The council rolled the dice at the craps table, and they lost,” Claire, a Humber College faculty member said.

“I think we should have been involved from the beginning, to be honest. We’re the ones with the biggest stakes in the outcome of this,” Richardson said.

She’s noticed students advocating on Twitter during the strike, but has been disappointed with students’ lack of direct involvement.

“I think the biggest problem is Humber students have been very vocal on social media. They think that’s making an impact. I don’t believe it is. I don’t think it’s going to make the change we need.”

The head of the colleges’ bargaining team said it will be looking to the provincially appointed mediator for direction now.

“This is a terrible result for the 500,000 students who remain out of class,” Sonia Del Missier said in a statement. “I completely sympathize with our students who have been caught in this strike for more than four weeks.”

With the strike being in its fifth week, students are still worried about what this will mean for their studies. Students have been voicing their concerns about tuition refunds to which there hasn’t been a straight answer.

Humber College’s Twitter has been lighting up with frustrated students.

We don't see any scenario in which that would happen. Similarly to the potential revised schedule which was shared with students last week, our plan would be to extend the fall semester into the beginning of 2018. We will do all we can to cover all critical learning outcomes.

Premier Kathleen Wynne met with both OPSEU and the College Employer Council this afternoon about coming to an agreement. Both sides are now in a media blackout until further notice and no apparent resolution is in sight.

In an effort to get back tuition money, student representatives from several Ontario colleges have filed a class action lawsuit against the colleges to get a refund. They claim the colleges breached their contract to provide vocational training and a full term of classes.