Trump at UN: US may “totally destroy North Korea” if left with no choice 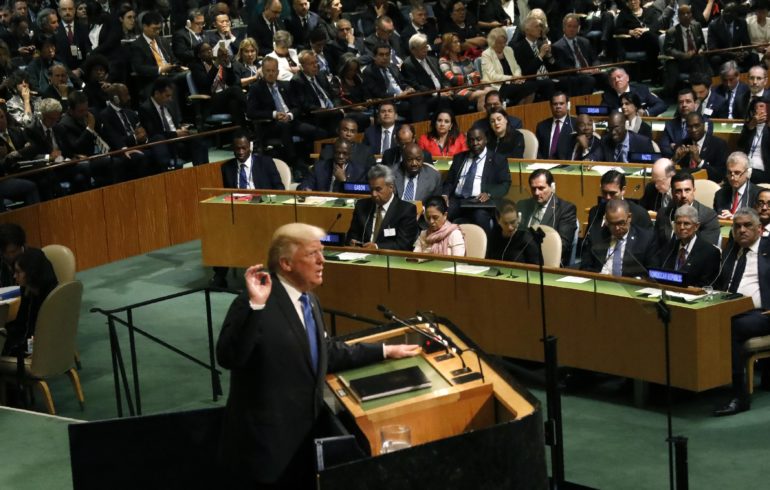 U.S. President Donald Trump warned that the U.S. would destroy North Korea in his first address to the United Nations General Assembly on Tuesday.

“The United States has great strength and patience, but if it is forced to defend itself or its allies, we will have no choice but to totally destroy North Korea,” Trump said during his nearly 45-minute speech in New York.
“Rocket man is on a suicide mission for himself, and for his regime,” he said, referring to North Korean leader Kim Jong-Un.

Frustration with North Korea has been brewing in the Trump administration since February when the totalitarian nation started conducting missile tests with greater frequency.

Trump’s strong threats came after he called North Korea a “depraved regime,” and mentioned the death of American college student Otto Warmbier, who died in June of this year after being detained by the North Korean government.

Trump then turned his focus on another “reckless regime” in Iran, citing the country for “mass murder, vowing death to America, destruction to Israel, and ruin for many leaders and nations in this room.”

“The Iranian government masks a corrupt dictatorship behind the false guise of democracy,” he said.

Trump also suggested terminating the Iran nuclear deal, calling it “one of the worst and most one-sided transactions” and an “embarrassment to the United States.”

The UN is a venue to promote peace. Today, the president used it as a stage to threaten war. https://t.co/LFMAFNSW0K #UNGA

Shockingly reckless. The human cost of “destroying North Korea” would be counted in millions of lives, including thousands of Americans. https://t.co/wdSHMtcMEF

Presidents have always been clear to deter threats: “We could, obviously, destroy North Korea with our arsenals” –@BarackObama last year

Trump’s ignorant hate speech belongs in medieval times-not the 21st Century UN -unworthy of a reply. Fake empathy for Iranians fools no one.

In over 30 years in my experience with the UN, I never heard a bolder or more courageous speech.

He then spoke out to put a stop to the threat of international terrorism of “Al-Qaeda, Hezbollah, the Taliban, and others” by stopping any and all support for their “vile and sinister ideology.”

“We will stop radical Islamic terrorism because we cannot allow it to tear up our nation, and, indeed, to tear up the entire world,” he said.

Trump, who has been critical of the United Nations in the past, acknowledged the “beautiful vision” that is the UN depends on the “independent strength of its members.”

He further emphasized this message of sovereignty by stating: “As long as I hold this office, I will defend America’s interests above all else.”

Trump concluded his speech by thanking his audience and by saying, “God bless you, God bless the nations of the world, and God bless the United states of America,” he said. “In fulfilling our obligations to our nations, we also realize that it’s in everyone’s interest to seek the future where all nations can be sovereign, prosperous, and secure.”

Prime Minister Justin Trudeau was not present at the UN today, but is scheduled to address the General Assembly on Thursday.