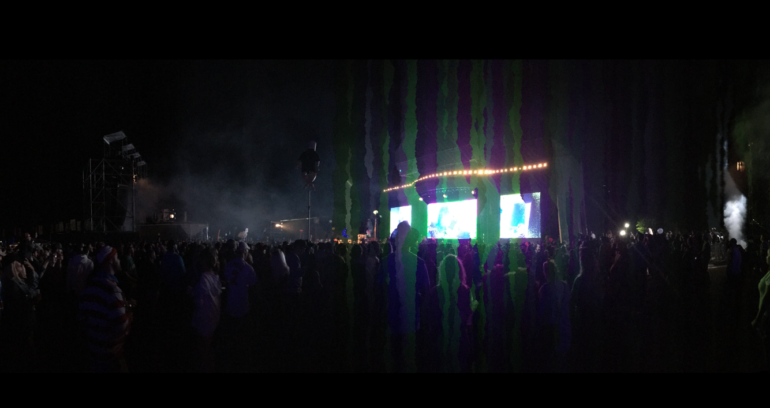 It’s a hook from one of their most popular tracks, but is also symbolic of the experience at this year’s Wayhome music festival in Burl’s Creek Event Grounds, in Oro-Medonte, Ontario.

Getting a closer spot to see the performances this year was not as perilous as previous installments of the festival. Attendance at Wayhome 2017 was much less than in previous years, forcing the organizers to reduce the number of stages from four to three, and the number of campgrounds from two to one.

Rumours of financial instability are widespread despite the estimated 15,000 people in attendance. Many concert goers have lamented the lack of true star power in terms of this years headlining acts, which could be a reason why attendance has diminished.

While taste in music is inherently subjective, those in attendance were compelled to compare this year’s lineup to the star-studded performances from the two previous year’s headlining acts. 2015 featured Neil Young, Kendrick Lamar and Sam Smith, while 2016 featured LCD Soundsystem, Arcade Fire and The Killers.

In Neil Young and Arcade Fire, the festival offered Canadian born acts with substantial fan bases. This year did not feature artists of similar Canadian prominence.

While the low attendance could signal the end for the largest multi-genre festival in Ontario, the festival still managed to provide a significant amount of enjoyable concerts for those who decided to make the trip to Burl’s Creek.

One act that impressed many Friday night was EDM group, Justice. The French dance-music duo brought their trademark disco-techno sound with impressive sound clarity. Those in attendance got down to their world-wide hits including “We Are Your Friends”, “D.A.N.C.E.” and “Audio, Video, Disco”.

Solange had one of the more imaginative performances when she took the stage in the late afternoon on Saturday. The background decor enveloped the singer in red LED light providing an original aesthetic as she expertly delivered the majority of her recent album “A Seat At The Table”.

The monumental task of closing out the three-day festival was given to reclusive singer Frank Ocean. The singer poured his heart out on an intimate stage that was in the centre of the crowd rather than being positioned on the main stage.

Ocean performed many slow ballads from his most recent work “Blond”, which was inspired by his struggles through heartbreak and injured vocal-chords in recent years. Ocean said during the concert that he had only performed a handful of times this year and that he isn’t fully comfortable with performing in front of so many people. His emotions reverberated through the crowds and left many in attendance with lasting memories of a man willing to share the most personal elements of his life.

While attendance was down and non-musical attractions that were present at previous years such as the Ferris wheel were not present, the festival still came through with shows for fans of multiple genres.

Wayhome stands alone as the biggest multi-genre festival in Ontario but it might not return in 2018 for a fourth installment.

In both of the previous two years, after the festival’s final performance finished, the organizers announced the opening date for the following year. No such announcement was made this year.

Organizers are expected to release more information about this year’s attendance numbers and the possibility of a festival next year in the weeks to come.