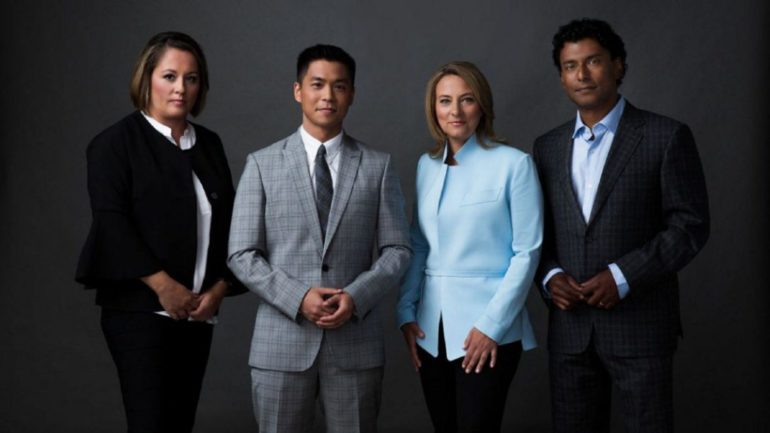 CBC has announced a quartet of new hosts for The National, from left to right, Rosemary Barton, Andrew Chang, Adrienne Arsenault and Ian Hanomansing. (CBC NEWS)

Peter Mansbridge stepped down from his anchoring duties in July after nearly 30 years with The National. The show will relaunch in the fall, bringing about a multitude of format changes.

“Like many others in the media space, we look at how technology and other things are changing audience behavior and the big strategic question we were trying to figure out is what does a nightly television show need to do to serve audiences when it lives in a continuous news environment,” CBC News general manager and editor-in-chief Jennifer McGuire said.

The network also wants to focus on implementing a digitally innovative and a modern format going forward.

“The television format will be more digital and we will change its style in terms of its visual look, and also its storytelling style. In all those ways, we think it’ll be more modern,” McGuire said.

Host of CBC Vancouver News Andrew Chang said he senses the huge responsibility that he’s about to take on.

“It’s not lost on any of us the institution that the program has become over the last several decades and the immense responsibility that comes with steering that ship forward. But at the same time, not a single one of us would be here in this role on this team if we didn’t believe we can take it in a very new direction,” Chang told Humber News.

The four hosts will be fulfilling their duties from multiple locations throughout Canada: Arsenault and Hanomansing in Toronto, Barton in Ottawa and Chang in Vancouver.

“Geographically, I bring something very clear to the program that will be unique and that’s by virtue of being the western time zone of the country. That will allow us to broadcast potentially a very different program at 10 o’clock p.m. Vancouver time and folks in Toronto would see it in 10 p.m. Eastern time” which allows the show to be “more flexible” and “adaptable” to uncover stories throughout the day.

“Those evacuation orders don’t wait for the next morning. For me to have that ability to parachute into an evacuation zone to be able to report, gather and host a part of a program from those locations on any given night, that’s going to be a huge asset.

Chang said that he is looking forward to the challenges of his new job.

“The scale of what we’re trying to do is immense but we appreciate, recognize and respect the fact that Canadians by large feel the same way so it’s been an incredible undertake that we’re about to embark on,” he said. “I’m looking forward to working with the team, three of the brightest journalistic minds that I can possibly think of. And we’re going to be collaborating on a daily basis to create the best program we can.”