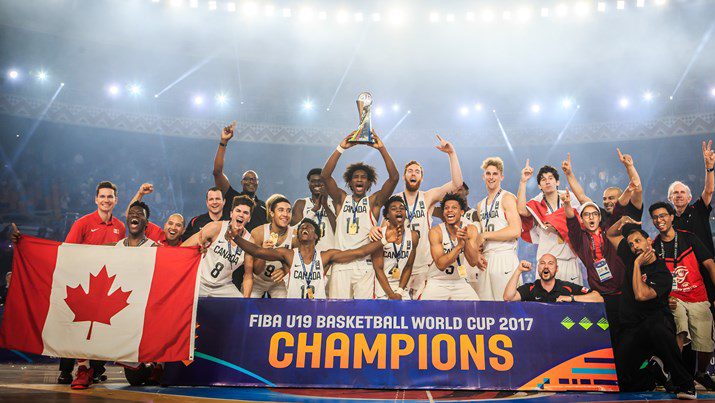 Team Canada defeated Italy in the finals of the 2017 FIBA U19 Basketball World Cup, the first time a Canadian basketball team has won Gold on the World stage. (FIBA.com)

Canada is no longer just a hockey country.

Team Canada defeated Italy 79-60, in the finals of the 2017 FIBA U19 Basketball World Cup, making it the first time a Canadian basketball team have won gold on the world stage on July 9.

Team Canada’s men’s program first participated in the World Championships in 1954, making it 63 years without winning a medal.

The crucial victory of the tournament came when Canada bested the perennial powerhouse and two-time reigning champion American team 99-87 in the semi-finals.

With the unlikely win, Canada flipped the landscape of international basketball on its head.

“It’s the biggest win we have ever had,” said Michele O’Keefe, Canada Basketball president and CEO. “It’s a benchmark, but only time will tell how big it actually is, we still have a lot of progress to make.

“We have three primary goals at Canada Basketball, one is to build our sport participation to rival soccer and hockey, the second is to capture the hearts and minds of Canadians, and third is to get to the podium consistently,” she said. “We think this gold medal ticks off the second two boxes, and hopefully it will inspire young kids to start playing.”

Several Canadian players have been drafted in the NBA in recent years. This includes Andrew Wiggins and Anthony Bennett getting drafted first overall, making them the most coveted players in the world at the age of 22 and 24, respectively.

USA Today Sports named Barrett as its top-ranked college recruit for 2019 and the NBA isn’t considered a far-cry.

“R.J. is a very special player, and athlete, and he’s got a great head on his shoulders, as he continues to get older and more mature, I think he can do whatever he sets his mind to,” O’Keefe said.

With NBA stars like Steve Nash growing up in Victoria, B.C., and Andrew Wiggins coming from Thornhill, Ont., many can attribute the growth of Canadian ballers in B.C. and Ontario to being home to NBA teams. While the Raptors are surging in Toronto, the Grizzlies abandoned Vancouver for Memphis, Tenn.

But this version of Team Canada included two players, Lindell Wiggington and Nate Darling, who are from Nova Scotia, which has traditionally not been a hotspot for producing pro basketball players.

“Basketball Nova Scotia and the club teams out there have done a great job of building their programs over the years, so every once in a while there is an athlete or coach who pops up that’s from Nova Scotia” O’Keefe said. “Sure it’s a hot spot, but I would say we need to keep things in perspective because it has a smaller population, but they’ve shown some great resilience, Nova Scotia has won the Canadian National championship at couple of the age group levels, so I’d say basketball in Nova Scotia is doing some great things.”

Canadians are witnessing a large scale shift in the landscape of international basketball with players like Wiggins already dominating the NBA and others like Barrett coming up the pipeline.