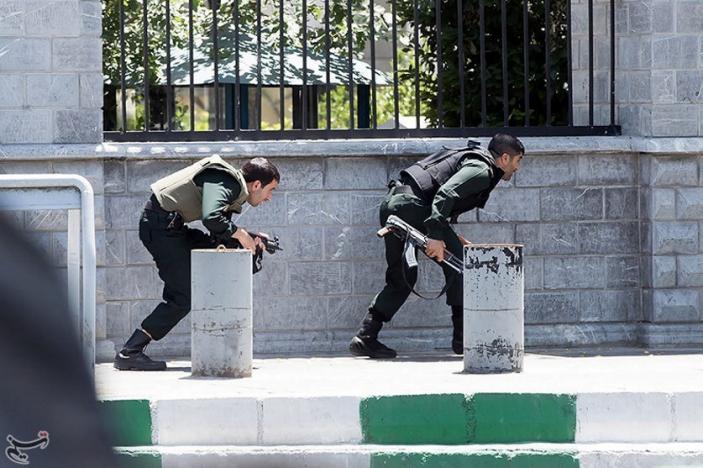 A man takes cover during an attack on the Iranian parliament in central Tehran, Iran. Tasnim News Agency/Handout via REUTERS

The motivations and messages of today’s ISIS attack on the Iranian capital are new mixes of the political and religious, an expert says.

The assaults on the national parliament building and tomb of Ayatollah Khomeini in Tehran took the lives of at least 12 people and injured at least 42 others.

This closely follows Saturday’s attack in London and other attacks in Kabul and Baghdad.

The Tehran assault is the fourth claimed by ISIS since May 26, which is the beginning of the month-long observance of Ramadan.

“During Ramadan, conflict is forbidden,” said Faisal Devji, Oxford University history professor and expert in Islamic philosophy. “If anything, its a breaking of the Islamic tradition.”

The targets of the attack have different meanings as well and the attack on the shrine, housing the remains of Ayatollah Ruhollah Khomeini, is very symbolic, Devji said.

The Ayatollah Khomeini was the religious and political leader of the Islamic Revolution in 1979. But ISIS was attempting to strike a blow to the “political firmament in Iran” rather than any religious site, Devji said.

The simultaneous offensive on Iran’s parliament building is “also clearly an attack on the regime,” Devji said. “Of course, its an attack on democracy, and we really have to see it that way.”

The attacks also follow others in Europe and Asia, a strategic part of “a return to a globalization of violence,” said Devji, after the “rapid defeat and destruction of ISIS in Syria and Iraq.

The historic, religious divide between followers of the Sunni and Shia branches of Islam is only one part of a bigger issue, he said. The Revolution in 1979 “had a lot of support among Sunni Islamists as well. But the Iran-Iraq War and the reaction of the Gulf countries in particular against the Iranian Revolution saw contemporary forms of sectarian violence emerging out of that event,” Devji said.

Aggression and violence among Muslim countries is not always sectarian.

“Qatar, which is a Wahhabi Sunni country, is being quite literally ‘cut off’ by Saudi Arabia, United Arab Emirates, Bahrain, and Egypt, and that is obviously not sectarian conflict,” he said.