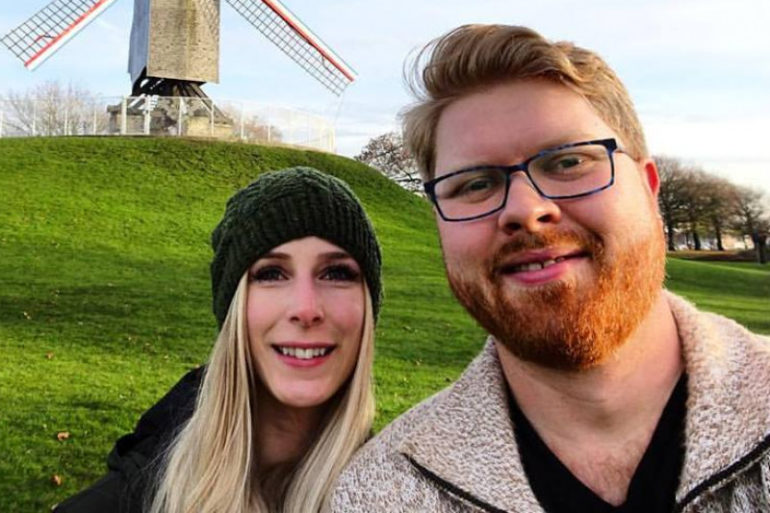 Amidst mourning, the family of Christine Archibald has started a charitable movement with the tag line “Chrissy Sent Me.”

Archibald, a Canadian from Castlegar, B.C. died in the arms of her fiancé, Tyler Ferguson,  after a white van mounted the sidewalk and deliberately struck pedestrians at London Bridge on Monday.

Christine Archibald and her fiancé, Tyler Ferguson lived together in London. (GoFundMe/ Chrissy Sent Me).

Since then, a friend of the family started a GoFundMe campaign, which has raised $13,000 as of Tuesday afternoon.

Dylan Fettes has been Ferguson’s best friend since they played hockey together as five-year-olds. In October, Ferguson is to be the best man at Fettes’ wedding.

“I was fortunate enough to be able to meet Chrissy and she was an incredible person with a kind soul and a very gentle personality,” said Fettes.

“Both families thought the best way to memorialize Chrissy would be to start a fund and donate the proceeds to charity. Through her work at (Calgary agency) Alpha House she would have really liked that these funds were going to charities she was passionate about,” said Fettes.

To Fettes, the donations can also be a healing tool for friends, family members and the community.

“Speaking to Tyler I could tell his spirits were lifted when he saw all the love and support on this GoFundMe page. The more we can raise for charity, the better these families will feel as they move through grief,” said Fettes.

One of the benefactors of Fettes’ GoFundMe campaign is Alpha House in Calgary, where Archibald worked. The non-profit, which provides detox programs and shelter services, released a statement via Twitter regarding their loss and the community support they’ve received.

We are overwhelmed with your kind wishes & generous donations honouring our dear friend, Chrissy. Thank you. #kindness #chrissysentme

Since the Archibald family released their statement calling for the public to donate to local charities, people in Canada and London have been making charitable contributions to honour Archibald’s memory.

Covenant House Vancouver, a shelter in Archibald’s home province of B.C., which offers services to homeless youth is one of many charities which has received donations from people saying “Chrissy Sent Me.”

“We definitely have seen donations in response to the Chrissy Sent Me movement,”said Kristy Hayter, a coordinator with the organization.

Hayter hopes that the movement inspires people to continue their generosity.

“This is a wonderful outpouring of something positive that can come from something horrific and hopefully this will encourage people to be positive forces in their communities, wherever they live,” she said.

“We are deeply moved by the #ChrissySentMe movement and the acts of love occurring in response to the tragic violence in the London attacks,” said Hayter.

Within a day of the statement, #ChrissySentMe was trending on Twitter in Canada, with many taking to social media to spread the word.

Archibald had dedicated her career in Canada to working with vulnerable members of the population in homeless shelters. Since her death, people across the country have been inspired to contribute to local causes.

Showing my support for the #ChrissySentMe movement by donating to the @DailyBreadTO today.

Archibald, 30, reportedly moved to Britain to live with Ferguson.

The Chrissy Sent Me movement has resonated overseas as well.

Calgary, where Archibald worked and lived for years, paid special tribute to her on Monday.

Ceremonial flags at City Hall have also been lowered in sorrow for those lost and in tribute to this remarkable Calgarian. https://t.co/O4mM3fBsf5

Those interested in contributing can visit the GoFundMe page here.