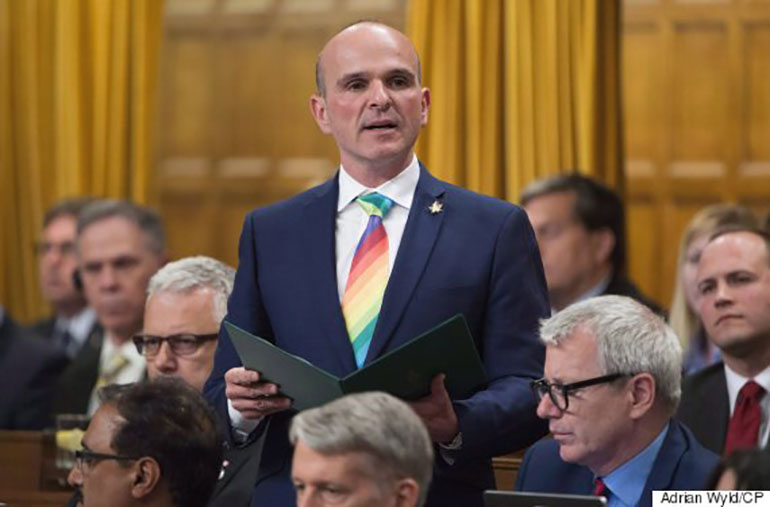 Prime Minister Justin Trudeau has named Edmonton MP Randy Boissonnault, seen here in the House of Commons on June 13, 2016, as his special advisor on LGBTQ2 issues. Boissonnault will work with advocacy groups to promote equality for lesbians, gays, bisexual, transgender, queer and two-spirited people — a term used broadly to describe indigenous people who identify as LGBTQ. (THE CANADIAN PRESS/Adrian Wyld)

The federal government is looking to put Canada on the map as the top travel spot for the LGBTQ2+ community.

Randy Boissonnault, an Edmonton MP and special advisor to Prime Minister Justin Trudeau on LGBTQ2 issues, announced in Parliament on Monday that $100,000 will be pledged to promote and train businesses and tour operators within Canada.

The LGBTQ2+ community accounts for 49 per cent of Canada’s tourism dollars by bringing in $4.2 billion annually.

Colin Sines, president and executive director of Travel Gay Canada, said the money will help boost Canada’s presence to the LGBTQ2+ communities around the world.

“Canada is vast. You can visit Canada 10 times and not go to the same place,” Sines said. “The problem has been that no one has taken the lead on pulling something like this together.”

The money will be used over two years and at the end of that time, Sines said 18 destinations across Canada will become fully inclusive for LGBTQ2+ tourism.

Boissonnault said in the past Canada has sent a strong signal that the country is welcoming by legalizing gay marriage. He said this move is another step in Canada’s role as a promoter of equal rights.

“We’re adding an LGBTQ lens on things, so that you can use the proper language, use the proper pronouns, you can be sensitive in the way that you talk about spouses and partners,” Boissonnault said in a phone interview the day after the announcement. “I think it’s smart training. It’s just good business.”

Minister of Tourism Bardish Chagger said in Parliament Monday that the government is partnering with Travel Gay Canada to provide training to businesses wanting to join the program.

“This training will help attract more tourists across this country creating more customers for small businesses,” she said.

Sines said businesses will have to sign a code of ethics to ensure quality and safety.

“When an LGBTQ consumer sees our logo it makes a powerful statement to them that this is a safe environment,” he said.

Boissonnault said some cities have a better infrastructure set up to welcome the LGBTQ2 community, but places like Fort McMurray, Alta., which is having its first pride barbecue this summer, are starting to open up their doors.

“I think all of our cities are on a journey,” he said. “If there’s anybody out there that is closeted and wondering if the federal government has their back, they shouldn’t wonder anymore.

“Canada absolutely has their back,” Boissonnault said.