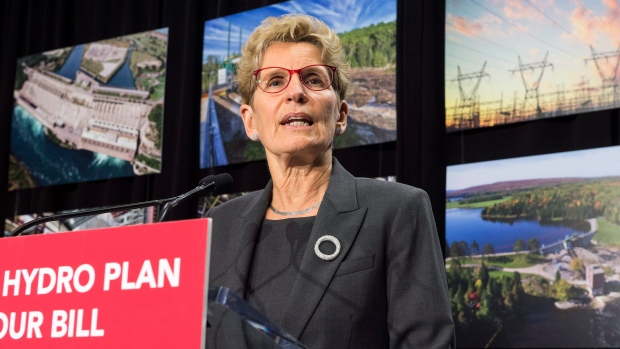 Ontario’s will be seeing relief from high hydro bills following a decade of steadily increasing rates and the Liberals’ steady decline in approval ratings.

Ontario Premier Kathleen Wynne announced a new plan Thursday morning that will reduce hydro rates by about 17% on the average bill.

That’s on top of the 8% reduction announced at the beginning of the year, making rates drop by a total of 25% on average.

Wynne said the rate relief strategy—which will kick in this summer—is built to last.

The Premier said when rates decrease, they will remain at a low rate for at least four years. The change won’t come without a cost, however.

Wynne will be re-financing existing power-generating contracts, which will cost the government $2.5 billion over the next three years.

“Over time, it will cost a bit more. That’s true. And it will take longer to pay off. That’s also true. But it is fair…” said Wynne.

“The burden will now be shared more evenly and more appropriately,” she added.

At a press conference at Queen’s Park, Wynne acknowledged that the government’s approaches to hydro management included “mistakes.”

Wynne said that incentives first implemented to vitalize green energy production were “too generous” and that asking one generation of hydro users to bear the full cost of electrical infrastructure was also a mistake.

“For 30 years we’re going to be paying off these Liberal mistakes thanks to the Green Energy Act and it’s just completely unacceptable,” Ontario PC energy critic Todd Smith told reporters.

“Back then, we told Dalton McGuinty and Kathleen Wynne that these were going to be the results. Multi-billion dollar increases, $1,200 a month hydro bills for people in rural Ontario.

They ignored that…” he said.

Practically speaking, the mistakes were not small and had serious repercussions.

Kathy Katula of Buckhorn, Ont. is one of many rural Ontarians who felt the brunt of the rate increase.

Standing in tears in front of Prime Minister Justin Trudeau earlier this year, the mother of four–who has been working nearly 75 hours a week for the past year to compensate for soaring hydro rates–begged Trudeau for a change.

“I’m putting my faith in God and you that you’re going to make our country a place where we can prosper, again,” sobbed Katula.

Katula revealed that although she’s making what should be enough money, she is reduced to a diet of instant oatmeal and Campbell’s soup.

“I make almost $50, 000 a year, Mr. Trudeau and I am living in energy poverty. Please tell me how you’re going to fix that for me and all of us in rural Ontario,” she added.

But hydro is a provincial responsibility and the Ontario government’s new plan is intended to even out hydro bills across the board. This includes areas in rural Ontario where people are being charged high delivery fees that sometimes exceed the cost of hydro used.