Majority of middle-aged Canadians are not playing it safe, sex survey suggests 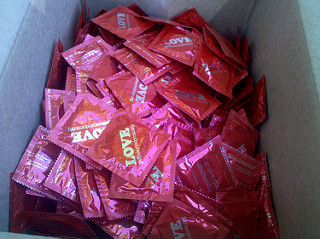 A study released Thursday shows a majority of Canadians aged between 40 and 59 are not practicing safe sex.

Out of the 2,400 individuals asked online, 65 per cent of men and 72 per cent of women reported not using condoms during their last sexual encounter.

And there are consequences to not practicing safe sex.  Between 2003 and 2012, the Public Health Agency of Canada reported a 153 per cent jump in all reported Chlamydia cases. Among those aged 50 and up, HIV cases in Canada increased to 22 per cent in 2014 from 15 per cent in 2009 and syphilis and herpes rates are constantly rising.

Performance anxiety, erectile dysfunction and fear of ruining the moment are among the reasons middle-aged Canadians cited for avoiding condom use.

The study’s co-author Robin Milhausen told the Toronto Star that committed relationships may also increase the risk of unprotected sex.

“Love, trust and intimacy are the death blows to condom use,” she told The Star. “The more committed you feel…the less likely you are to use a condom, but love and trust don’t protect you against chlamydia.“

Attitudes towards STD rates among middle aged adults may not be logical although the reasoning behind avoiding protection may seem logical.

Fifty-eight per cent of individuals surveyed stated they were not concerned with contracting an STD, however reports throughout the years show STD rates have been on the rise since the mid 2000s.

The study shows while having sex gets easier as people age, discussing it becomes harder.

Schools at all levels implemented sex education programs for students and youth, but adults don’t have anything besides PornHubs’ Sexual Wellness Center to show them alternatives to out dated beliefs and stigmas.

However, with the variety of independent sex shops in Toronto, learning about sex and one’s body doesn’t have to be boring. Indeed, it could become a bonding experience for couples or new partners.

“Smaller novelty stores will often have other things that aren’t just condoms,” she said. “People can come in and look at funny things and the mood is lightened, so they can go from there and get condoms.”

“A lot of people don’t like condoms because of the smell and taste, but there are a lot of ways to go around it,” she said. “We sell Japanese condoms that aren’t chemically processed so they don’t have that rubbery tire smell. If the taste of latex is something someone doesn’t like, we also offer flavoured condoms and lubricants with no sugar.”

Just like technology, sex and sexuality are constantly evolving. It’s time for  kids to sit their parents down and have a talk about the birds and the bees Version 2.0.