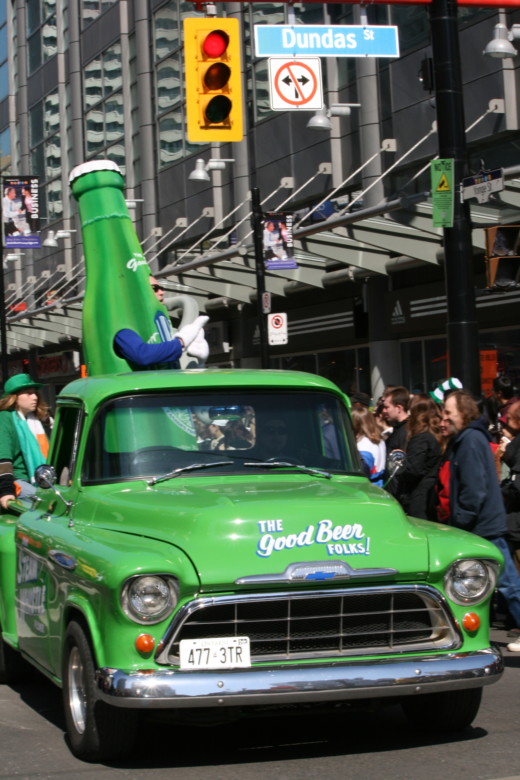 Traditional advertising methods include time slots for television or radio or ad space purchased in a newspaper or magazine.

Other examples of traditional ads are found in public places like billboards or subway stations.

For small businesses looking to stand out, being different is good. And more affordable.

According to Michael Rosen, Program Co-ordinator of the Bachelor of creative advertising degree, traditional style advertisements can run a company more than half a million dollars for a single national television spot.

Rosen says small businesses need to be creative with advertising to set themselves apart from competition.

Steam Whistle is a company that prides itself on its unique-ness. Tim McLaughlin, brand manager of Steam Whistle, said that with the competitive business atmosphere of the city, making a name for yourself is vital.

One of the many custom cars Steam Whistle employs named “Grumpy”(Mihnea Stanciu, Flickr)

“I think we have really built the brand through non-traditional sponsorships and getting involved in the community at the grassroots level,” said McLaughlin. He says this gives their client base the chance to interact and sample their product.

“They have a great presence on the street and people remember them when they see them and people know you’re active in the market,” said McLaughlin.

Rosen cites three steps to successful advertising: gaining an audience, getting noticed, and being remembered.

“Everybody is vying for attention. You’re seeing 3,000 ads a day, what breaks through the clutter? What makes people stop and go, wow!” said Rosen.

Tom Mihalik chooses a more personal approach to his advertising. The owner of Tom’s Place, a Toronto retailer of men’s suits, calls in to radio morning shows to talk about his business like a guest host.

He says this form of communication helps keep customers up-to-date on whats new with his shop.

“Our store is based on deals, constantly deals, so that’s why I figured the best thing to do is go on the radio,” said Mihalik

Rosen says that for many small business in Toronto, non-traditional methods are the best bet.

“You take a small place like Tom’s Place, they’re small, they’re still prosperous with one location. They can’t afford a huge advertising budget so he probably gets a good price from that radio station and it’s one way [to do things],” said Rosen.