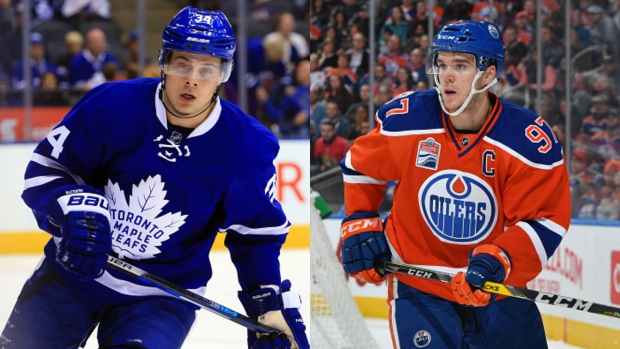 It’s going to be a first overall showdown tonight in Toronto.

Connor McDavid, the number one pick in the 2015 NHL Draft will be facing off at the Air Canada Centre against rookie center Auston Matthews, the first pick of the 2016- draft.

They will be going head-to-head for the fist time in the NHL. The anticipated matchup is at 7:30 p.m.

The 19-year-old Oilers captain will be coming to his hometown for the first time in his career. He currently has 12 points this season, the most in the league.

McDavid was named Tuesday as NHL’s First Star for October.

“It’s going to be cool going up against him,” Matthews told reporters on Monday. “Edmonton has gotten off to a pretty hot start so once again it’ll be a tough challenge for us.”

Matthews is tied with Flyers forward Wayne Simmonds with the most goals in the league. Each player has six goals.

McDavid and Matthews were teammates in September for Team North America at the World Cup of Hockey. Matthews finished the tournament with two goals and three points, while McDavid had three assists.

Hockey writers and media have been comparing the two top young players in the NHL ever since the draft last June: McDavid, the next “great one” against Matthews, who made history scoring four goals in his first NHL game.

“All eyes will be on those two kids… From my perspective, the best athletes want to be in those positions.” @OfficialGretzky #EDMvsTOR

“I’m looking forward to it, first time at the ACC  playing against the Leafs. That’s the team I grew up watching, “said McDavid to reporters.

2 of the best young hockey stars meet for the 1st time in the @NHL tonight. We break down their great starts: https://t.co/N4dnPQdlcH

The Toronto Maple leafs are rebuilding. With such a young talented team, coaching staff hope to continue developing the players, many who are previous first round picks for Toronto.

The Leafs announced today they have recalled 23-year-old Russian forward Nikita Soshnikov from the Toronto Marlies.  In six games with the Marlies he has a goal and two assists.

.@SportChek Player Alert: The #Leafs have recalled Nikita Soshnikov from the @TorontoMarlies.

“I think both players will try and work that much harder to prove to the hockey world which one is number one,” said Kiss.

He said the two have been under a microscope since they began playing in the NHL so they will be able to play under pressure tonight.

“I don’t go to many games often but I made sure I got a ticket for this one. I don’t want to just talk about it at school tomorrow, I want to tell people what I saw,” said Knickson.