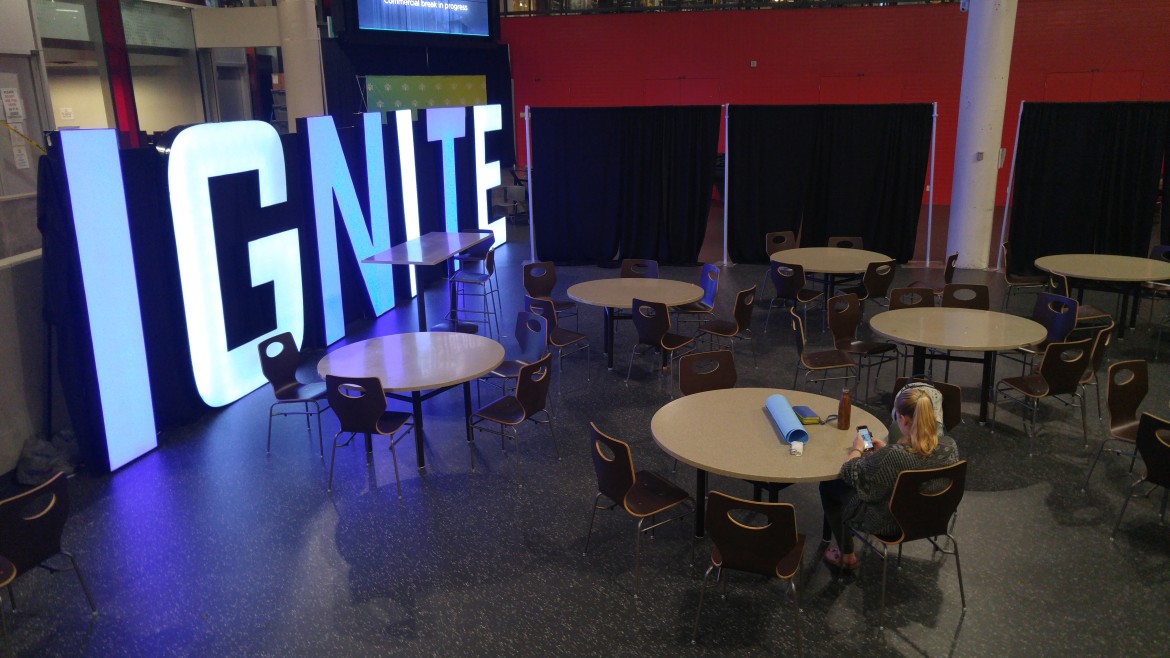 A key contract for a component of the controversial $400,000 rebranding of the Humber Students’ Federation (HSF) was awarded to a former classmate of HSF Executive Director Ercole Perrone, Humber News has learned.

The consulting contract was awarded to Hugh Ruthven, principal of Intuition Brand Planning, of Victoria, B.C., through a process that Perrone acknowledges did not involve a Request For Proposal (RFP) or any other “competitive proposal process.”

Perrone who has been a paid staff member of HSF for almost ten years confirmed his connection to Ruthven after Humber News discovered that the two men attended Royal Roads University in B.C. together and graduated at the same ceremony in 2011.

“I told them I knew of this individual who I did my Master’s with who does this for a living. I invited them to speak with Hugh and they made the decision.”

“When we weren’t going to have much luck finding an external strategist who could provide us with the support that we needed, I went to Ahmed our President and James Pashutinksi, who was our chairperson and declared a conflict of interest,” said Perrone.

IGNITE said its actions were compliant with its purchasing policy.

“You don’t need to do an RFP as long as you have a competitive process where you’re either interviewing companies or individuals or having them send in proposals and quotes,” said Perrone in an interview. “So, we did all that. There certainly was a thorough process we did not do a quote, unquote, RFP though. There’s a specific definition of what a RFP is. We didn’t do that. We knew exactly what we wanted and we met with, consulted with, interviewed several people.”

The hiring of Ruthven first came to light when IGNITE made a PowerPoint presentation to Humber’s College Council in August where questions were raised about the high cost of the rebrand.

Ruthven has worked in advertising and marketing for more than 30 years. According to his LinkedIn, in the past he’s worked with DDB Canada and McDonald’s. Ruthven launched Intuition Brand Planning in 2003 and said he doesn’t have a website because he gets most of his business through referrals.

According to Ahmed Tahir, IGNITE’s President, Ruthven was the consultant who conducted the preliminary research that would ultimately lead to the Humber Student Federation’s rebranding.

In an interview, Ruthven told Humber News that Perrone, whom he said he had not spoken to in three years, asked him for suggestions as to how he would conduct the research.

“Then he came back to me and said, ‘You know what sort of cost would be attached to that sort of thing,” said Ruthven. “So then I estimated costs for each stage of the brand discovery.”

Ruthven said at Perrone’s request he submitted a five-page proposal.

Two weeks later, Ruthven said he received a phone call from a group of people, including Perrone and Tahir, who asked him to walk them through the proposal and posed several questions. It was during that phone call that Ruthven learned he was awarded the contract.

According to Ruthven, no mention was made of a conflict of interest to him at any point during the process.

When asked what exactly Ruthven did, Tahir said, “It’s all about distilling what our brand is in a few key points. And then from there building our names for the rest of the brands. So really reviewing and talking to students internally and externally to the organization to figure out what the brand means to them … that will lead to setting a foundation to build up the rest of the name.”

In a subsequent interview, Tahir confirmed that the decision to hire Ruthven was left to himself, IGNITE’s Communication Director Natalie Bobyk and James Pashutinksi and complied with HSF’s purchasing policy.

The policy states that “HSF’s procurement function shall be performed in an open, fair and transparent manner,” and that “supplies, equipment and services must be acquired through a competitive process.”

It further states that expenditures between $1,001 and $25,000, requires a minimum of three written quotes. Expenditures exceeding $25,000 require a Formal Request for Proposal (RFP).

Tahir said that prior to the awarding of the contract, IGNITE contacted other parties at Humber, who he did not name, for further recommendations of companies providing the same services as Ruthven.

“We reached out to them to see, like, what are some folks that you think would be good to use,” Tahir said.

Emily Eyre, Humber’s Manager of Purchasing Services, said she has no knowledge of any outreach from members of IGNITE to her department.

“If they reached out it wasn’t to me,” said Eyre in an interview. “Certainly none of my staff has come to me or brought any information to me.”

Eyre said the department would have advised IGNITE to approach the process differently.

“If they did reach out to us we would say ‘You know, we’d be more than happy to do a competitive bid process for you,’ if they provide us with the information,” said Eyre.

Humber News contacted Tahir again asking for details on any conversations IGNITE might have had with anyone in the purchasing department but received no response. Perrone said he was not sure who IGNITE had contacted at Humber.

In an attempt to clarify conventional business procurement procedures, Humber News contacted Professor Angelo Crupi, Supply Chain Management program coordinator at Humber College. Crupi made it clear that he has no involvement in IGNITE’s business affairs.

“What normally happens [in industry],” Crupi said, “is that all requirements for whatever service or material or water bottles, whatever it might be, are posted online. It’s easy these days with online tools like Merx where RFQs [Request For Qualifications] are posted.

Anyone can go on the website and see what the requirements are. Then, everyone’s free to respond. From there, they would select a shortlist of potential suppliers and then go further and do further research into the shortlist.”

Crupi went on to state that in specific instances, companies do choose to go with a sole-sourced contract. In the case of companies with stakeholders, this is done with documentation.

“If it’s your business and your money, then no one’s going to require you to do that,” said Crupi. “But as soon as you have, for example, shareholders or partners that aren’t involved necessarily in the day-to-day operations of the company, then they’d want to make sure that you’re finding the best possible supplier.”

On Wed. Oct. 19, IGNITE will be holding a Special Meeting of the Members at Humber’s North Campus Student Centre. According to IGNITE’s website, the meeting will provide more information on the rebranding. Students will also have the opportunity to vote for or against approval of the federation’s legal name change from Humber Students’ Federation to IGNITE.

According to Ahmed Tahir, a vote of approval would require legal documentation to be updated with the new name.

(For more on the last meeting)