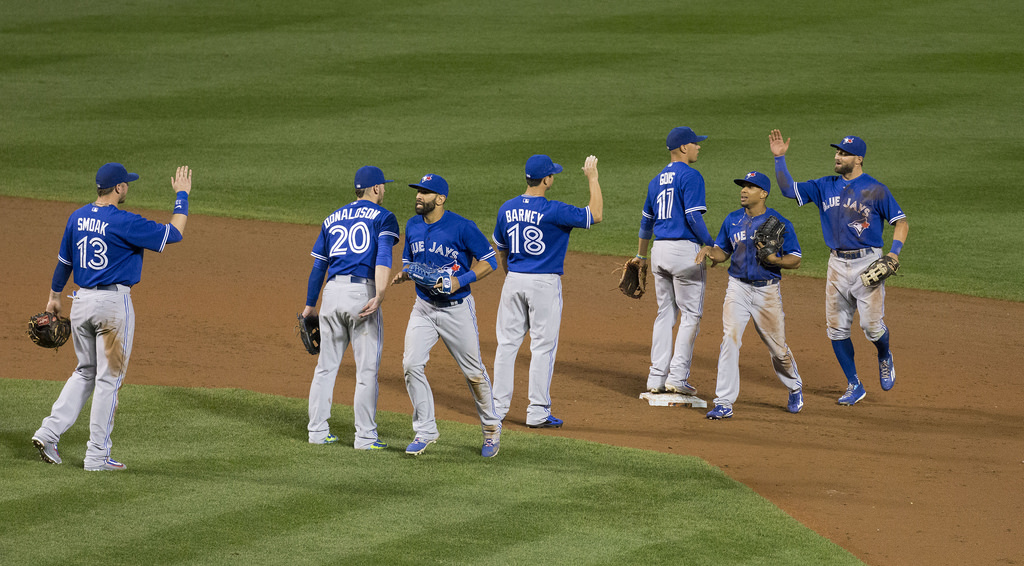 The Toronto Blue Jays celebrate a victory against the Baltimore Orioles on Sept. 29, 2015. (Keith Allison/Flickr)

TORONTO — The eyes of the baseball world are focused on the synthetic grass of the Rogers Centre for Tuesday’s American League Wild-Card matchup between the Toronto Blue Jays and the Baltimore Orioles.

One game will decide if the bluebirds will face the Texas Rangers in a rematch of last year’s American League Division Series, which saw the most dramatic five-game series baseball has seen in modern history. The winner will play Game 1 this Thursday in Arlington, Texas.

“If they can bring back some of that magic for tonight, they got a shot” – baseball coach Carter MacDonald

But let’s not get ahead of ourselves. If the Blue Jays even want to think past Tuesday night, they will need an all-world performance from starting pitcher Marcus Stroman (10-9, 4.37 ERA), who has struggled recently, going 0-5 and giving up 42 hits in his last seven starts.

“I think Stro’s the perfect guy,” said manager John Gibbons in a press conference Monday afternoon. “We’ve seen him do it before, he did that for us a couple times last year (referring to Stroman’s high-pressure pitching from 2015’s post-season run). We’re glad he’s available.”

Stroman has struggled against Baltimore this year, posting a 7.04 ERA in four starts vs the Orioles.

O’s starter Chris Tillman (16-6, 3.77 ERA) was Baltimore’s best in the rotation, but had a dip in production towards the end of the season after spending time on the 15-day disabled list with shoulder inflammation.

Whenever the Orioles replace Tillman, Toronto will have a tough time dealing with what many call “baseball’s best bullpen.” Left-handed closer Zach Britton leads all of Major League Baseball with a perfect 47-for-47 in save opportunities, while right-handed reliever Brad Brach has held right-handed hitters to a .123 batting average.

That could spell trouble for a Blue Jays lineup that’s almost entirely right-handed (Ezequiel Carrera, Michael Saunders and Ryan Goins are the only full-time lefties, while Justin Smoak and Dioner Navarro are switch-hitters).

Toronto also chose a bad time to get cold at the plate. According to Bruce Arthur of the Toronto Star, in their last 28 games, the Blue Jays have a team on-base plus slugging percentage under .700, comparable to utility player Darwin Barney, who at best would be described as “league-average.”

If Toronto wants to manufacture runs vs Baltimore, they’ll need to take advantage of their ability to get on-base. Led by third baseman Josh Donaldson’s whopping .404 on-base percentage (OBP), the Blue Jays walked more than anyone in baseball (632) and finished third in team OBP (.330).

Coincidentally, the Orioles issued the most walks in baseball with 545.

Carter MacDonald is a baseball coach based out of London, Ont., and spent his younger days in Ontario’s youth baseball system. He regularly attends Blue Jays games, and thinks the key to Toronto beating Baltimore is taking advantage of their rabid Canadian fan base.

“They sold out literally every game this year and made the entire league take notice,” said MacDonald in a telephone interview.

MacDonald, who still calls the Rogers Centre by its old name (SkyDome), remembers watching Game 5 of last year’s ALDS when Jose Bautista hit a three-run home run in the bottom of the seventh to put Toronto ahead 6-3.

“I’ll never forget that ‘pop,’ when the crowd instantly knew (the ball) was gone and Bautista flips the bat…an instant historic moment for the city of Toronto,” MacDonald said.

“If they can bring back some of that magic for tonight, they got a shot.”