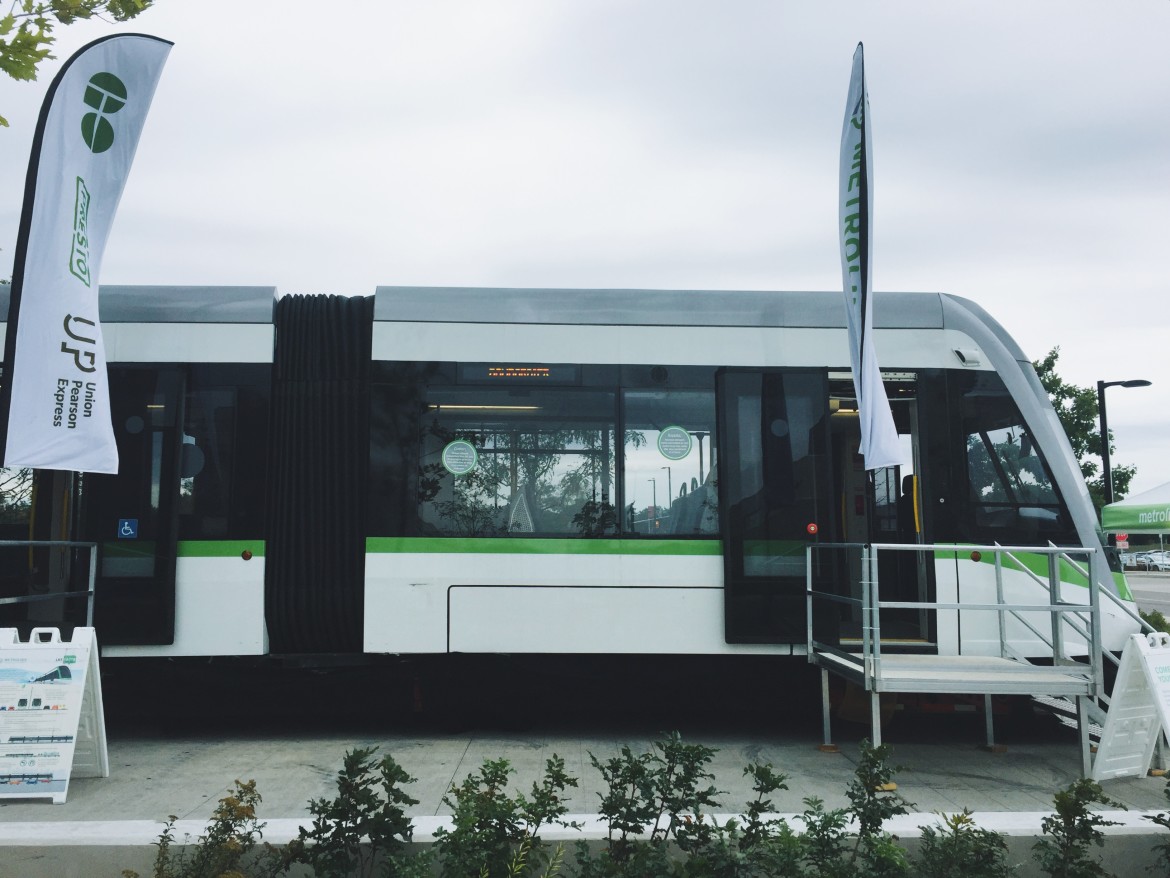 Propped outside of Humber College North Campus is half of a light rail transit car. Placed next to the Humber College bus loop, the fancy new Metrolinx LRT stares at transit-goers as if saying “sure, get on that bus, because this luxury may never be yours.”

The display car made its appearance to promote the new Finch West LRT project, which begins construction next year. News of this line is enough to make any commuters heart flutter, but the construction won’t end till 2021, which means most current students will be long gone by the time its ready.

“I hope I still won’t be here,” joked Sara Sayed, a Humber College student taking a one-year exercise science and lifestyle certificate. “I don’t think we’ll get to enjoy it, but it’s a good idea.”

Bombardier is in charge of manufacturing the vehicles for the Finch West LRT. In recent month, the company has managed to build a bad reputation quicker than it’s been making trains.

The company has missed multiple deadlines for the TTC’s streetcar order, but Metrolinx is on a separate contract and everything seems to be on schedule.

“All the stuff you’re hearing about with people being angry with Bombardier is all TTC,” said Meredith Wolting, a brand ambassador for Metrolinx.

“They’re late with their delivery of the TTC streetcars downtown, but for us we’re monitoring it very closely because we know they’ve had issues in the past.”

The new Finch West LRT will be attached to the future York University subway extension and travel down Finch West, making Humber College the 18th stop on the line.

It will operate similar to a street car with its overhead wiring, but will have a dedicated line in the middle of the road.

According to an Metrolinx pamphlet, each LRT vehicle can carry up to three times more riders than a bus and will be more reliable.

Luis Perez, a Humber College tourism management student, took a tour of the train car outside of Humber and said since it’s going to impact his city he wants to figure out what it’s all about.

“I wanted to see for myself what the plan is and how it’s going to work,” said Perez “I’m impressed, it’s going to be something that helps us get to school and get home faster.”