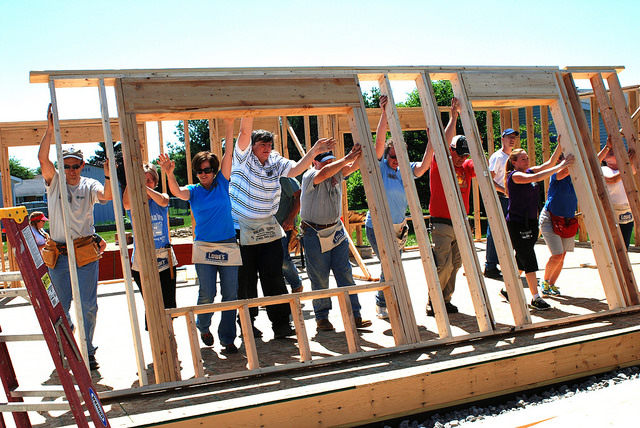 Organizers of Brantford’s Nelson Mandela Day of Caring Task Force joined with National Volunteer Week to celebrate volunteerism in the community and bring awareness to the importance of community engagement and interaction.

On the first day of celebration, the City of Brantford west of Toronto is hosting a flag raising ceremony to officially launch the week’s events.

Maria Visocchi, the city’s Manager of Corporate Communications, says the celebration is aimed at getting people interested in volunteering.

“It’s not just for the satisfaction of helping others, but to make a real and meaningful difference in your community and to be engaged in what’s happening,” Visocchi told Humber News.

Visocchi also says that the Brantford Nelson Mandela Day Task Force is meant to inspire and empower people to make a difference in their community, in honour of the late president of South Africa.

Mandela, who died in 2013, devoted 67 years to public service, which is why the day in his honour encourages people to spend 67 minutes volunteering.

Nelson Mandela Day is usually celebrated on his birthday, July 18, but it goes beyond just one day of activism. This year is the first year both honorary events joined philosophies to create one week of volunteering excitement.

“Both the organizations are working towards the same goal, which is to create awareness and increase volunteerism,” Visocchi said.

According to Statistics Canada, a 2013 study shows 44 per cent of people over the age of 15 participated in volunteer work in the community.

Shirley Fennema is one of those volunteers.

For ten years the retired volunteer at Bibles for Missions in Brantford, has devoted her time to a local thrift store.

“Volunteering is extremely good for your health. The impacts are so important and so strong to Toronto as a whole because they’re able to change lives in a lot of ways.” – Ainsley Kendrick, Volunteer Toronto

Managing the cash register and tidying up the clothing for sale keeps Fennema busy and on her toes.

“I get more out of it, even though there’s no pay. I feel good that there’s going to be somebody there and maybe I’ll make a difference in their life somehow, even if it’s just smiling at them when they come through the door,” Fennema said.

Fennema likes to talk with customers and make them feel welcome when they come into the store.

Ainsley Kendrick has been working at Volunteer Toronto for five years, and says that there are more teenagers and seniors volunteering, with a gap in the middle-aged category.

But there is a growing number of working adults who are volunteering more now to give back to the community and share their skills.

Kendrick says community involvement is important for a contributing to a happy and helpful community.

“Volunteering is extremely good for your health. The impacts are so important and so strong to Toronto as a whole because they’re able to change lives in a lot of ways.”