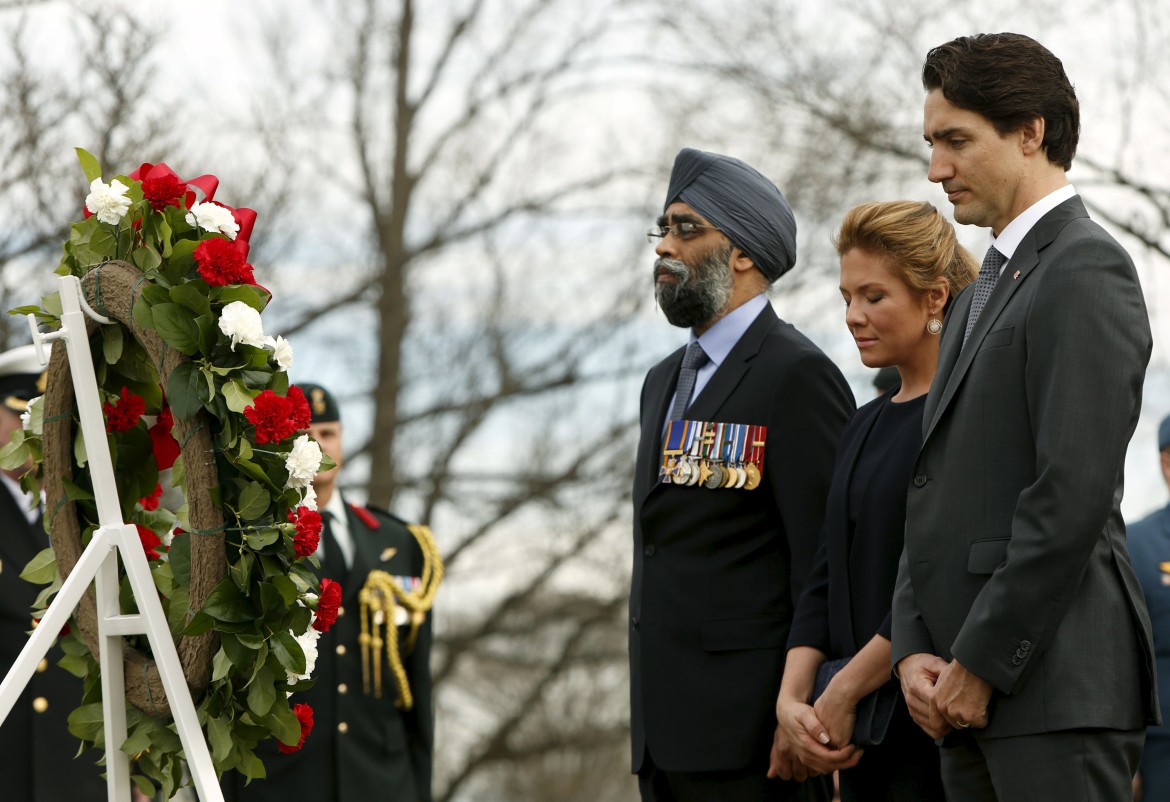 Prime Minister Justin Trudeau capped his three-day trip to Washington, D.C., today on a positive note, urging optimism as he paid tribute at Arlington National Cemetery and looked ahead to a progressive future in Canadian-American relations.

Trudeau’s docket was full on the final day of his visit, which follows last night’s White House state dinner held in his honour, the first for a Canadian leader in 19 years.

The first stop was Arlington National Cemetery. After the playing of both Canadian and American national anthems, Trudeau walked past a guard of honour to lay a wreath before the Tomb of the Unknown Soldier.

The tomb pays tribute to the countless fallen soldiers whose bodies were never recovered or identified.

Trudeau then proceeded to the Canadian Cross of Sacrifice, a memorial in honour of Americans who fought in Canadian forces in both World Wars and the Korean War.

The 24-foot granite cross was designed by Canadian architect Sir Reginald Bloomfield and was dedicated to Arlington National Cemetery in 1927.

Trudeau then held a Q&A session with the students of Washington’s American University.

The Canadian PM has already drawn comparisons to Kennedy in American media, including a cover story published by the Christian Science Monitor headlined, ‘Justin Trudeau: Is he Canada’s J.F.K.?’

Trudeau challenged Americans and Canadians “to live up to the progressive ideals that have defined our two countries.”

When asked by a student about how he plans to stem a right-wing rise in Canada, Trudeau conceded there was a “tone of negativity that was very compelling” in his Conservative predecessor’s message, but maintained that Canadians “find it hard to sustain anger and fear for very long.”

Trudeau was in a jovial mood when asked about the current American political climate, with heated presidential primaries currently underway.

“We know and generally like our neighbours,” he joked, clearly referring to the aggressive xenophobia of Republican candidates such as Donald Trump and Ted Cruz.

Trudeau’s final stop for the day was a luncheon hosted by progressive think-tank Canada 2020 and the Center for American Progress (CAP).

The event was aimed at connecting similar-minded people and increasing discussion on progressive ideas in Canada and the United States, Canada 2020 Director of Communications and Operations Alex Paterson told Humber News.

In a brief speech, Trudeau highlighted the productivity of his visit and his optimism for the future success of progressive politics in both nations.

“Real progress demands an inclusive economic vision that gives all citizens a real and fair chance at success,” he said, highlighting the middle class tax cut crucial to his Liberal party platform as one step in making that vision a reality.

Trudeau noted a mutual commitment to sign the Paris climate change conference agreement, as well as cross-border trade facilitation, as positive steps taken during his trip.

He also emphasized a movement away from the censorship and secrecy of the past.

“Openness and transparency are no longer simply optional for progressive governments,” said Trudeau.

All in all, the sunny relations on display between Trudeau and U.S. President Barack Obama were the focus of the much-publicized visit. The  first-year Canadian PM has proven to be a media hit, in particular.

“There’s been a lot of buzz in [Washington] about Trudeau’s arrival and that can’t be seen as anything but positive,” said Paterson.

However, any optimism is tempered by the prospect of a new president in the White House come 2017. Trudeau will need to build on the success of this trip with his new counterpart, whoever that might be.

“Fear is easy. Friendship? Friendship takes work. Canada and the United States have proven time and time again that finding common ground is worth the effort,” he said during the Canada 2020-CAP event.

“On our own, we make progress. Together, we make history,” said Trudeau.

No meetings were planned with Obama for the day. Trudeau is scheduled to fly back to Ottawa later this evening.