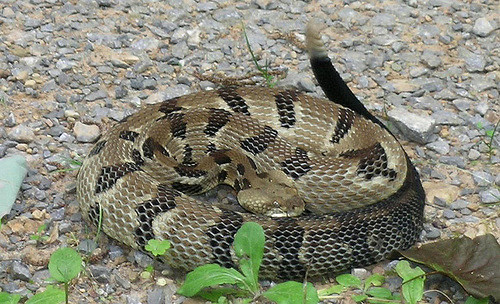 The Timber Rattlesnake is one of the reptiles the University of Kansas study sites could slither into Ontario. (Courtesy of Sean Clawson/Flickr)

A new study says that warmer temperatures in Ontario could lead to a northern migration of diverse venomous snake populations, but leading experts say they likely won’t flourish here.

“As much as the climate may be hospitable for them to move north, the landscape isn’t. There’s no fear in my mind of any snakes coming north,” said Dave Ireland, managing director of biodiversity at the Royal Ontario Museum.

The study out of the University of Kansas said evidence has been accumulating that geographic distributions of many species has shifted as a result of changing climate conditions.

“Species that move well, especially through fragmented habitats, will be the best able to expand into the province” – Jolanta Kowalski

“According to our future projections, we forecast an expansion of snakebite risk areas northward in Canada,” the study reads.

Ireland told Humber News that Ontario does not have any available habitat for new venomous snakes, as our own native snake, the Eastern Massasauga rattlesnake, is already at risk.

“The species is endangered and is only found in one pocket in the extreme south of Ontario and a few pockets of Georgian Bay and North Bay,” said Ireland, who is also on the Ontario Biodiversity Council.

“It’s just our road networks… you can’t walk more than 1.3 km anywhere south of Parry Sound without hitting a road,” he said.

The study references that it has been estimated that 9000 patients are attended for snakebite and 5 die in the United States each year.

No need for increased vigilance

If venomous snake populations increase in Ontario, there would be a need for increased awareness and protection.

But a media relations officer from the Ministry of Natural Resources and Forestry said there is no need for increased vigilance in regards to snakes.

“Species that move well, especially through fragmented habitats, will be the best able to expand into the province as the climate warms. Snakes do not generally fit this description,” Jolanta Kowalski said in an e-mail to Humber news on Thursday.

“Some bird and mammal species on the other hand, should be well able to adapt and spread north. The wild turkey is one example of such a bird, and the opossum is an example of a mammal,” Kowalski said.

Another new species to the province, the possum, is also not a cause for concern said Sara Street, executive director of Wye Marsh Wildlife Centre.

Possums were once native to areas at the very tip of southern Ontario, but Street said she has encountered the species several times in the last five years in Midland, Ont.

“They are expanding their range… I hadn’t ever seen any up until four or five years ago, and then now I’ve seen probably one or two a year and mostly near garbage sites and crossing roads.”

Possum expansion in Ontario is supported by the warmer climate but also their invasion is caused by humans as well said Street.

“Some report a number of years ago that they were hitch-hiking on vehicles with humans,” she said.

In the Don watershed near the Leslie street spit in downtown Toronto “we found a spider that had never been found before in Canada.”

Ireland said the spiders are quite common south of the boarder but “no one is raising any flags about it because it’s a great predator of aphids and little mites.”

Many species may make their way north in the coming years but Ireland says as new species arrive new ecosystem connections will form and humans are going to need to embrace that.

“Climate change isn’t something that’s going to go away. We need to recognize that our ecosystem will change and make sure that we adapt as part of that ecosystem.”

As for the snakes themselves and fear of poisonous ones, Ireland’s not afraid.

“There’s no fear in my mind of any snakes coming north,” he said.

“Not that that would be any problem – because snakes are great.”