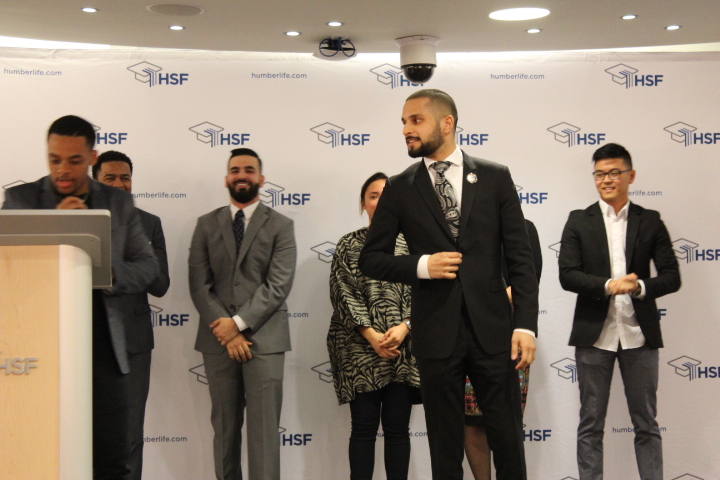 With almost 75 per cent of the votes, Ahmed Tahir will keep his position as Humber Student Federation (HSF) president for another year.

HSF unveiled the new student government in the K building at Lakeshore campus on Friday after polls closed.

“Feels great. I’m so glad that so many people voted,” Tahir said.

This year a record number of students voted in the election. More than 7,000 students cast their ballots, which is 24.97 per cent of the student population. It is the highest number of votes in HSF history.

Tahir also added that things aren’t going to get better unless HSF and students work together, and that he’s looking forward to growing with HSF.

Tahir won’t be the only returning face on HSF for the 2016-2017 school year. Two other candidates were also re-elected.

Ammar Abdul-Raheem will return as vice president of student life at North campus.

“It feels just as amazing and just as new as last year. To know that students still care about someone that goes up to them and talks to them about issues,” Abdul-Raheem said.

“During voting period, many students came to me and said ‘Anna we know it’s going to be you’.”

Maja Jocson was elected as Vice President of Student Affairs of Guelph-Humber, a brand new position in HSF.

She was overcome with emotion after hearing her election announcement.

“I think I have the experience to make this position a really great one to start off at least,” Jocson said.

Her first course of action is to make students more aware of what HSF has to offer.

Leading up to the elections, the disqualification of the third presidential candidate, Mikkie Decker, highlighted the importance of mental health awareness.

Decker was dismissed and stripped of her role as Vice President of Student Affairs because she didn’t meet the HSF academic requirements.

“It’s almost like a pass of the baton…as far as vision and understanding of what we would like to do for students,” Constantine said.

Not all is lost

Presidential runner up Joel Caldarola said he is grateful for the campaign experience.

“Everyone who was running had such great ideas. My hope is that the people who did win…and who were successful, I hope they take on some of those ideas.”

Caldarola added, “maybe Ahmed can take some of the stuff that resonated with me…that would be really great to see.”

As for re-elected president Tahir, he says he will be even more involved next year.

“Get ready! I will come at you all the time, and talk to you. So you’re going to get sick of me.”

Board of Directors: Daniel Roque

Board of Directors: Emma Kelly