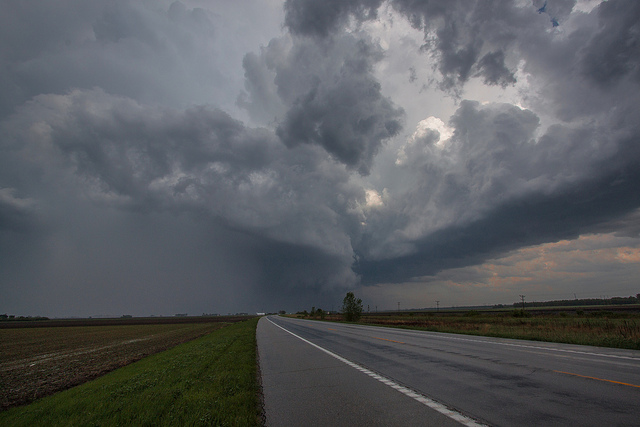 Environment Canada has confirmed the first tornado of the year in Ontario touched down near Mount Forest on Wednesday March 16.

Environment Canada categorized this as an EF1 tornado on the Enhanced Fujita scale, which rates the strength of a tornado based on the damage they cause.

Wind speeds blew up to 135-175 km/hr, and the tornado carved a damage path of about 3.5 kilometers long and up to 200 metres wide, said Environment Canada.

The storm was strong enough that it ripped bolted down grain-bins off of their cement bases. Some barns were also severely damaged, and a number of mature trees were snapped off or blown over. No injuries have been reported.

With more than a week to go until the first day of spring this tornado occurred uncharacteristically early in the year, said Geoff Coulson, Environment Canada, Warning Preparedness Meteorologist.

“It’s very unusual. This is the earliest tornado we have in our data-base in Ontario,” Coulson told Humber News.

Prior to Wednesday’s tornado, the earliest to touch down in March was back in 1948 in Windsor, Ont., said Coulson.

The unusually warm temperatures during the past few months have stemmed from an ongoing El Niño effect that has been experienced across Ontario all winter, he added.

“This has been a very strong El Niño event.”

The El Niño effect occurs when waters in the pacific ocean near the equator, off the coast of South America, are notably warmer than normal, he said.

“When we do have El Niño it does influence our climate here in the great lakes area by giving us generally milder than normal conditions.”

Coulson said it is usually much too cold this time of year to produce storms that have the right conditions to spawn tornadoes.

“These storms we got on Wednesday are more typical for storms we would get late in the spring.”

How to Stay Safe

“Get indoors if you can, into a room in the house preferably somewhere in lower levels away from windows and doors,” Linda Dickson, the Wellington County Community Emergency Management coordinator, told Humber News.

“But even in low-lying areas you have to be careful if there is a lot of rain associated with it. Those low lying areas can be susceptible to flash flooding if it’s a lot of rain that gets deposited from a large storm.”

Most importantly, families should be prepared to sustain themselves for 72 hours after an event.

“Given the degree of what some situations can bring … it may take that long of a time for help to get to you, or if it’s a situation where the power is out for a extended period of time,” she said.

Taking precautions as early on as possible at the first sign of darkening skies and sounds of thunder can be the safest bet.

“A number of our tornadoes are wrapped in rain and are difficult to see,” said Coulson.

One area that is particularly active for severe thunderstorms and tornadoes is from the Windsor area through London and up towards the Barrie area, said Coulson.

“Tornadoes of this type can occur pretty much anywhere from south western Ontario right up until the shores of Hudson bay and James Bay,” he said.

“Certainly in the last 10 -15 years we’ve also have had a number of events occurring to the north east of Toronto through areas like Peterborough county, the Kawartha Lakes area and then eastwards to the Ottawa valley.”

A Timeline of the deadliest tornadoes in Canada’s history: