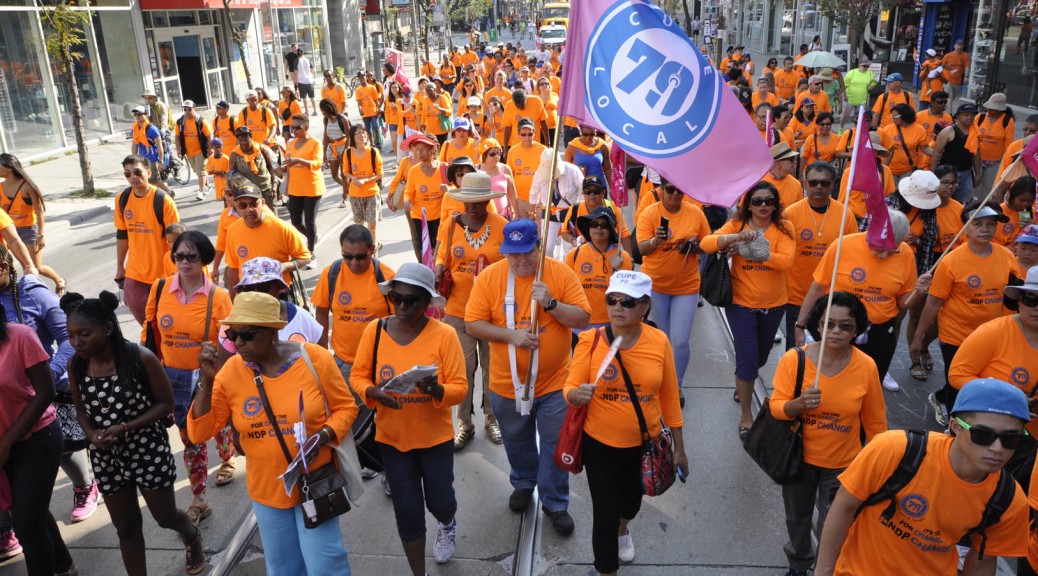 The union leadership agreed to a four-year contract for their 20,000 inside workers who staff community, child care and fitness centres, along with ice rinks and indoor pools operated by the city.

Local 79 President Tim Maguire was evasive regarding the deal’s contents.

“It was a tough round of negotiations. We moved forward on some issues and were able to push back on deep concessions,” Maguire said in a mid-morning news conference.

“I’m not going to get into the particulars of the deals…that will be recommended to the members,” he repeatedly told reporters.

“Negotiation is a combination of dialogue, garnering public support for your position (and) applying external pressure,” Coun. Mihevc, Ward 21

Maguire credited the union’s work-to-rule campaign for laying the groundwork for the agreement, but again would not get into specifics.

“We’ve had some tough-slogging negotiations over the past two weeks,” he said, decrying the city’s “aggressive approach” to collective bargaining.

“While this was a very difficult round of negotiations, we believe we have secured the best possible collective agreements for our members, ensuring they will continue to be able to deliver the great services Toronto residents depend on,” Maguire said in an early morning statement.

The publicly released offer included a five per cent increase in base pay throughout the next four years and a decrease in the amount of benefits for workers on long-term disability, to 70 per cent from 75 per cent.

Another provision guarantees that no full-time employee with 15 years of seniority as of Dec. 31, 2019 can lose his or her job as a result of contracting out or privatization.

Coun. Joe Mihevc (Ward 21, St. Paul’s West) said it’s common for details to be leaked during the collective bargaining process, whether it’s by the union or employer.

“Sometimes I have seen the union publish what they’ve got on the table and sometimes I’ve seen management do it,” he continued. “It’s nothing I haven’t seen before, especially if it’s highly contentious.”

Councillors do not get briefed on the agreement’s specific details until it’s put for a vote in city council, Mihevc added.

John Cartwright, president of the Toronto and York Region Labour Council, said it’s important to look at the agreement in the context of the precarious employment situation for so many workers, including those employed by the city.

“Although people think of city work and city jobs as stable and secure, in fact nearly half of CUPE Local 79 members are working in temporary or part-time positions, many without any benefits, many with scheduling issues that make it difficult for them to have a second job,” Cartwright told Humber News.

“I’m sure there was some work done on those key issues.”

The union had been without a contract since the beginning of this year.

The city had already reached an agreement with CUPE Local 416, representing the city’s 5,400 outdoor workers, which was unanimously approved by council Monday.