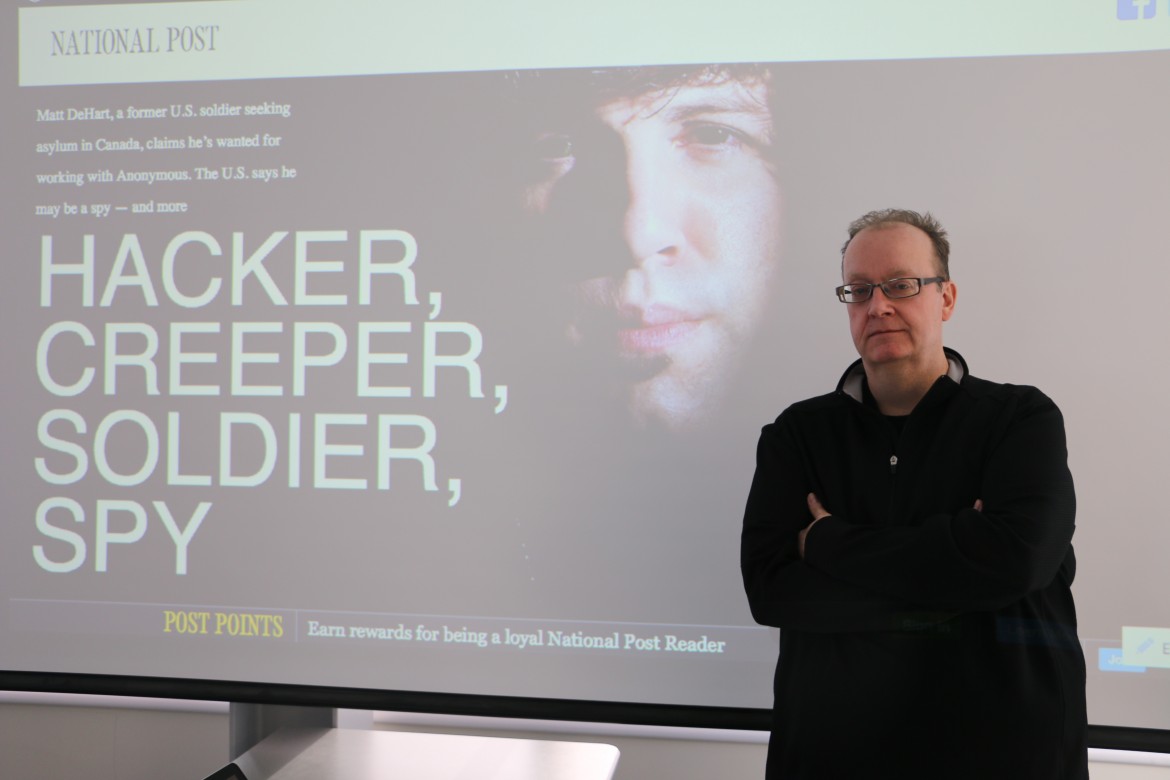 By Jeremy Appel and Charlotte Morritt-Jacobs

It was a seemingly regular day when Adrian Humphreys came across a bombshell of a story.

“I was reading federal court decisions on a slow news day and there was a small, short decision that had a couple red flag words … One was (that) it was an asylum case (with) Americans and the other was a reference to a claim of torture,” said the National Post reporter.

Humphreys came to Humber Lakeshore campus Tuesday to tell students the story of Matt DeHart, an American hacker with Anonymous who requested asylum in Canada after reportedly being tortured and accused of possessing child pornography.

Humphreys, an experienced crime reporter, untangled a web of intrigue to produce the longest series the National Post has ever published.

“It involved a naturally secretive world. It involved spies, child pornographers, Anonymous, which by definition is secretive, spy agencies, the FBI and the CIA,” he said.

A colleague told Humphreys that DeHart was just some crazy person and that he shouldn’t waste his time, but Humphreys had an abundance of time.

Humphreys knew he was onto something substantial when he received some FBI documents that confirmed DeHart had been interrogated.

“The F302, the file code number, started with the prefix with the FBI’s code for an espionage investigation. It didn’t start with the code for child pornography or even a computer crime investigation,” said Humphreys.

The next step was to interview DeHart in Toronto, where he was under house arrest and forbidden from accessing a computer. This proved somewhat challenging, as DeHart was not prepared to open up to just any stranger.

Humphreys had “to confirm absolutely everything just to assess his credibility,” even something as seemingly insignificant as what high school he went to.

“We had a nice understanding that neither of us trusted each other,” he joked.

Last week, DeHart plead guilty to possessing child pornography in exchange for a reduced sentence of 7-and-a-half years in prison, which Humphreys describes as a “huge incentive to plead guilty.”

The reporter said that whether DeHart indeed possessed child pornography is immaterial.

“There’s enough questions and concern … about how he was investigated, what the evidence that was used against him and the timing of the prosecution to warrant (suspicion),” Humphreys said.

Throughout this whole ordeal, Humphreys took what some would regard as excessive precautions in keeping his correspondences private.

“I was afraid of my e-mail being hacked. I was afraid of being doxed or lampooned or pranked by Anonymous…. This story really pushed me into becoming aware of the need to be prepared to talk in encrypted channels with people electronically,” he said.

“The text of this story must trip every single trigger of the NSA digital screen.”