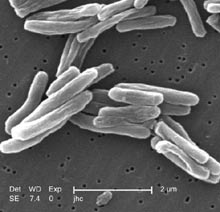 The World Health Organization has released a report with some facts that may be shocking to the public.

Most people with healthy immune systems can live with being infected with Tuberculosis, commonly known as TB, without it ever developing into the disease, which is when it can become deadly.

Dr. Frances Jamieson, a medical microbiologist with Public Health Ontario, said because AIDS affects the immune system it can’t contain the infection very well, so if a person with HIV/AIDS is exposed, their chances of it developing into the disease is much higher, while a healthy individual may never it.

“An Individual who is normal would have a only a 10 per cent lifetime risk of developing TB if you are infected as apposed to someone who has AIDS the have about 20-30 times more likely of developing the disease and a rate of 8-10 per cent per year,” Jamieson said.

The WHO report said the countries with the highest rates are China and India. Dr. Jamieson said that in those countries there are many factors that lead to people developing the disease.

“In places like India and China there’s a lot of TB disease in general and there are many factors that are there. There’s your overall nutritional status, whether you are in an area where a lot of persons can’t access medical care so they are likely to be spreading all the time,” Jamieson said.

Chris Haromy of the Lung Association explained that most Canadian citizens do not have to worry about the disease.

“In Canada there are 1,600 new cases of TB and in Ontario 650, so we get a fair percentage of those. Mainly due to the GTA, people moving to the GTA, foreign born individuals, mostly Africa and Asia. 557 cases came from foreign individuals in 2010,” Haromy said.

Jamieson explained there are also factors that explain that because of how good our medical care is. We pick up the disease so quickly that we don’t see that drug resistance.

“In North America we don’t see a lot of drug resistance and that’s because patient have access to good timely diagnostics. We can also test to see if they have a drug resistant strain and treat it accordingly.”

The WHO report sited that international funding for AIDS is 10 times higher than funding spent on TB, despite the similar death tolls.

The Government of Canada has an ongoing project called Global Fund to Fight AIDS, Tuberculosis and Malaria.

The Department of Foreign Affairs, Trade and Development is contributing $450 million, but only 18 per cent of that is going toward TB control.